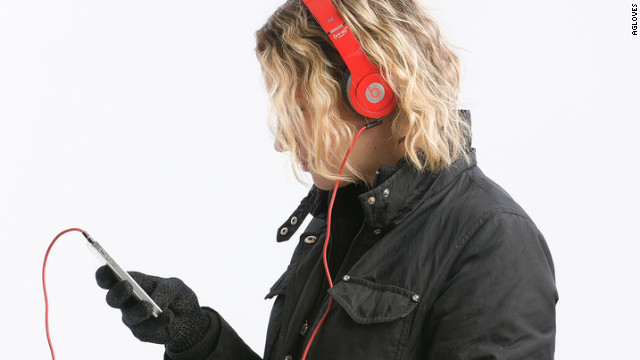 Agloves allow wearers to operate the touchscreen on a smartphone.

(CNN) --- The U.S. Army has been working for about two years on outfitting its soldiers with smartphones, but one obstacle to this technological upgrade likely will be familiar to anybody who has tried to operate a touchscreen phone in the winter:
Smartphones and gloves do not get along.
Rather than putting government money toward developing a new type of glove, the Army went on a little shopping spree. If the government is coming late to smartphones, and buying those from stores instead of building them, then surely someone must have solved this problem.
They aren't mainstream yet, but several companies indeed sell gloves that let the wearer operate a touchscreen without taking them off. And as more people discover the limits of their Android companions on a snowy day, these types of gloves could take off.
Read More
The Army and Air Force have landed on one brand in particular: Agloves. The little-known Colorado company is up against giant brands, including North Face, and more than half a dozen other scrappy upstarts, like Dots, Echo Touch, Freehands, Power Stretch and Tavo.
Yet, Agloves gets the top endorsement from the Army, where a shoddy glove doesn't mean a missed call but perhaps a lost life. The Army's Fort Bliss outpost in Texas tested several models of gloves promising smartphone compatibility as part of its mobility program. Evaluators favored Agloves, and the Army has sent many pairs of them overseas to fighters.
"These technologies coming out of small companies are literally game-changers," Michael McCarthy, a technology director for the Army, said in a phone interview.
The plain-looking winter gloves were described by the blog Mashable, a CNN content partner, as not particularly fashionable. For Jennifer Spencer, the 52-year-old founder and president of Agloves, fashion was never the point.
"Our competitors are in the fashion industry," Spencer said by phone. "We want to be seen as a wireless accessory first and foremost."
For that reason, you won't find Agloves in Macy's or Nordstrom. Instead, Agloves is sold at Best Buy, Verizon Wireless, Sprint and U.S. Cellular stores, which is where about half of its inventory was sold last winter season. They can also be purchased from Amazon.com and at the Agloves website.
Touchscreens are designed to respond to the natural electricity that our bodies produce, mainly through sweat. Agloves works by pulling the bio electricity from the wearer's wrist and palms, and transferring it to the fingers of the glove.
Agloves will ramp up production for the next winter season and add a couple of new styles, Spencer said. Current models cost either $18 or $24 per pair, a reasonable price for an Army-caliber utility.