Vimeo to emphasize videos in redesign 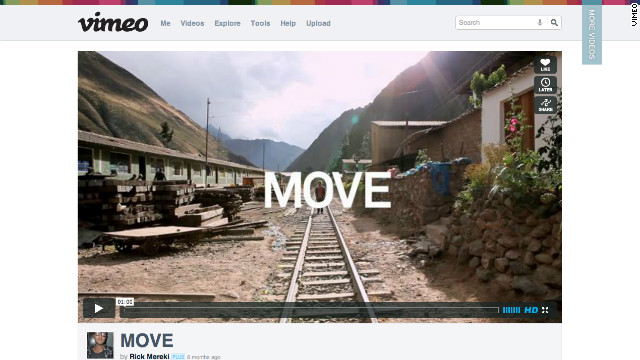 New York (CNN) - That a popular video-sharing website is retooling its layout to highlight, of all things, the video on each page seems like a head-slapping idea.
But that's exactly what's happening at Vimeo, an online video site with an artsy fan base.
Vimeo, which is owned by Web media giant InterActiveCorp, began welcoming some subscribers and nonpaying users to a test version of its new site Tuesday morning. The website is painted in pastels, with large fonts and videos.
The revision was conceived of in 2009, the company said, and development has been going on for more than a year, Vimeo CEO Dae Mellencamp said in a recent interview here at the company's headquarters.
Read More
Clicking a Vimeo link brings viewers to a page featuring a video that typically fills the screen. In order to see similar videos, the visitor can click a banner that hangs discreetly in the corner, which will trigger a ticker to drop down from the top of the page.
"We're putting the video front and center," Mellencamp said. "The idea is to show less by default and welcome more requests."
By that, Mellencamp means that Vimeo won't be bombarding visitors with text, buttons, related videos and advertisements dancing around the centerpiece content.
Compare that to YouTube, which is by far the largest video site on the Web. Below the YouTube logo on the page is the video's title, then buttons leading to more videos, and then the main video (in "small player" mode by default), surrounded by "more recommended videos," and "suggestions." On a typical video, more than a dozen distractions line the side of the page.
The new Vimeo home page is also a stark contrast to YouTube's. The layout looks more like a blog or a Tumblr dashboard by default. Users can switch, like iTunes, between other types of views, such as "couch mode" with videos filling the screen. Meanwhile, YouTube's home page, which was redesigned last month, has three columns packed with links to videos.
During Vimeo's current test period, the designers will learn whether they have concocted the magic formula for online video, or whether their long-in-the-works experiment missed the mark. And during that time, a key indicator will be how many people choose to switch back to the old design.
In a few weeks, Vimeo will begin allowing any registered user to get access to "the new Vimeo," as Mellencamp calls it. By July, Vimeo expects that the new version will take over the entire site, a spokeswoman said.