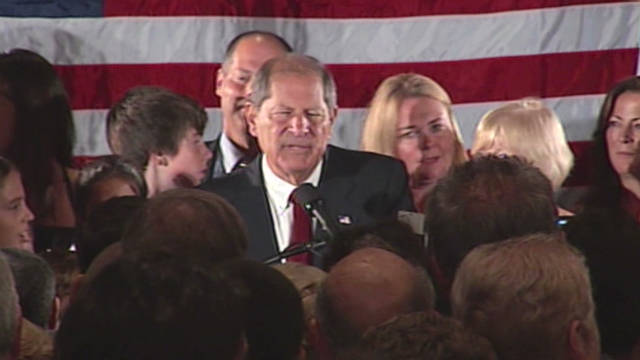 (CNN) -- In a huge upset that few would have predicted just months ago, a Republican won a special election in a heavily Democratic district in New York for the seat of former Rep. Anthony Weiner.

Republican Bob Turner won the special election Tuesday in the 9th Congressional District, defeating Democrat David Weprin after a heated, summer-long race that ignited Democratic fears of a quiet election morphing into a referendum on the party and President Barack Obama, ahead of next year's elections.

"We've asked the people of this district to send a message to Washington, and I hope they hear it loud and clear," Turner said at his election party in Queens with a packed room, many of them Orthodox Jews.

"Mr. President, you are on the wrong track."

Turner took 54% of the vote to Weprin's 46%, with 100% of the precincts reporting, according to unofficial results from Valerie Vazquez, communications director for the New York City Board of Elections.

At his victory party, Turner stood on a stage with Israeli and American flags behind him -- a reminder of one of the central issues in the race: U.S. policies toward Israel.

"We lit one candle today, and there's going to be a bonfire pretty soon," Turner said in his victory speech, just after midnight.

The district, which covers parts of Brooklyn and Queens, is one of the strongest Jewish districts in the nation. Weiner, who had served in Congress for seven terms, vacated the seat in June after admitting to sending lewd photographs on Twitter.

Turner, a former cable TV executive, made his first foray into politics when he challenged Weiner for the same seat in November and finished with a strong showing, winning 40% of the vote.

Koch, a Democratic Jew, hoped his support would send a message to the White House that Jewish Americans were dissatisfied with Obama's policies on Israel -- namely the president's position that a future Mideast peace solution requires Israel to return to its pre-1967 borders, with land swaps.

"I like President Obama ... I helped get him elected," Koch said at Turner's election night party. "But he threw Israel under the bus."

His remarks were met by cheers from the crowd, including one man who shouted, "He's a sell-out!"

Koch's nod pivoted the race into a relentless competition over who was a stronger supporter of Israel: Turner, a conservative Republican, or Weprin, an orthodox Jew.

Minutes after the election, the Republican Jewish Coalition released a statement in support of Turner.

"Jewish voters are coming to see that Republicans offer real solutions to our economic crisis, are resolute friends of Israel, and represent a way forward to a better future," said executive director Matt Brooks.

He added that the election has "huge implications for 2012 races in states with large Jewish communities, such as Florida, Ohio and Pennsylvania."

Back in Washington, both parties had downplayed expectations earlier Tuesday.

"This is not a district that Republicans have any right to believe that we can win, but we do have a good candidate," said House Speaker John Boehner, R-Ohio.

And despite having a 3-to-1 ratio of Democrats to Republicans and a long history of Democratic elected officials, Sen. Chuck Schumer of New York downplayed the district's strong tilt toward the left.

"President Obama won the district by much less than he won the rest of New York City," Schumer said.

"And so, to make the argument that this is a very liberal district and it's a close race, it's just not what the district has been."

Facing a last-minute crunch, national Democratic groups poured hundreds of thousands of dollars into ad buys within the last week, signaling Democratic concerns the race was heading for a neck-and-neck sprint to the finish line.

The final push came as a new Siena Research Institute poll Friday showed Turner with a 6-percentage point lead over Weprin just days before the election.

In addition to Israel, other issues took the spotlight this summer, notably the two candidates' positions on raising the debt ceiling and political issues surrounding the September 11, 2001, terrorist attacks against the United States.

But all ended well for Turner Tuesday, winning a campaign that now makes him one of two Republican Congressional members in the New York City delegation. The other is Rep. Michael Grimm of Staten Island.

And while Turner will soon be staking out a new office on Capitol Hill, he may not be there for long.

Due to population loss, New York has to cut two congressional districts and the 9th district has been widely speculated to get the ax in a redistricting process set to finalize in 2013.

CNN's Deirdre Walsh and Paul Courson contributed to this report.