Can they still raise taxes? Well, depends on who you believe 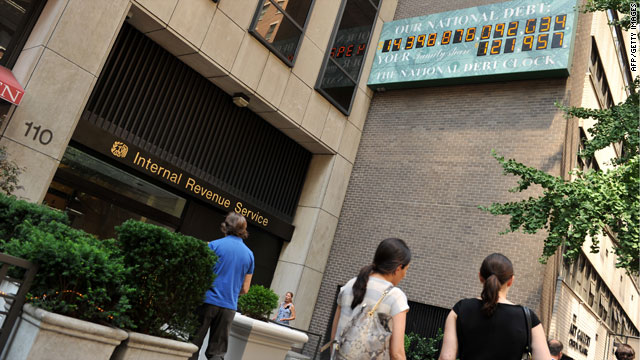 The National Debt Clock runs recently near an office of the Internal Revenue Service on Sixth Avenue in New York City.
STORY HIGHLIGHTS

(CNN) -- As the details of the debt ceiling deal start to emerge, it's not surprising that there's a disagreement between the White House and Republicans on whether the deficit reduction committee can or will tackle tax reform.

Here's what's behind the spin:

The joint committee can take up tax reform if it chooses to. The dispute is whether the deal is structured in a way that motivates the committee to do it. Keep in mind the committee's product -- if it passes Congress -- would take effect in January 2013, just when the Bush tax cuts expire.

Who will vote for debt deal?
RELATED TOPICS

Republican leadership aides say the committee is unlikely to tackle tax reform because the group's goal is deficit reduction.

• They say the Congressional Budget Office -- the official scorekeepers of any budget plan -- will rate the committee's deficit reduction package based on 2013 spending levels, when Bush-era tax cuts have already expired. That means they'll be working off a baseline with higher revenue -- as much as $3.5 trillion more revenue over 10 years.

• If the president wants to reinstate tax cuts for, say, the middle class, that would count as revenue lost. A committee focused on deficit reduction doesn't want to be in the business of losing revenue.

• So the committee would then need to find a way to offset that lost revenue -- closing loopholes wouldn't be enough. It would have to move to cuts.

• Republicans say Democrats on the committee are unlikely to want to institute even more cuts in spending.

Therefore, Congress will have to deal with the expiration of the Bush tax cuts at some time, but there's no motivation to do it in the context of a deficit reduction committee.

The White House says that the committee will be motivated to take up tax reform precisely because the Bush tax cuts will soon expire. One senior White House official says the schedule is motivating.

• First, the suggestion that it is impossible for the joint committee to raise tax revenue, they say, is simply false.

• If the joint committee decides as part of a balanced deal to eliminate tax subsidies for oil and gas companies or corporate jets, or if it decides to limit the value of itemized deductions for high-income earners, then these measures would raise revenue -- completely independent of any baseline assumptions. They can be part of a balanced agreement, and the president will be encouraging the committee to consider them.

• Second, nothing in the legislation, they say, specifies that the committee must operate under any specific baseline -- either the one that assumes the Bush tax cuts have expired, or the one that has them in place.

• Under the terms of the statute, the joint committee could decide to use whatever baseline it wants. If the committee wants to operate under a baseline that assumed the expiration of the Bush tax cuts for high-income taxpayers, it is free to do so. Likewise, if committee members want to operate under a current policy baseline that includes the Bush tax cuts -- which is what House Speaker John Boehner was relying on when he said he had agreed to $800 billion in revenue from tax reform -- they are free to do so as well.

• The legislation does not preclude revenue-raising tax reform. In fact, the president will be making the case that tax reform should be part of a balanced deal coming out of the joint committee.

Could the CBO use that baseline? It really doesn't matter. The committee could still raise revenue if it wanted to. For instance, tax reform that included closing loopholes -- tax breaks for jet plane owners, oil and gas subsidies -- would show up as reductions from the baseline, despite GOP claims that it would not.

Depending on who you believe, revenue increases -- whether they take the form of closing loopholes, ending subsidies or letting the Bush tax cuts expire -- may still be on the table in the next round. One way or the other, it will probably be up to the joint committee.

The question will be whether each side has the political will to push its position to the edge six months from now.