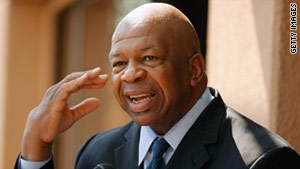 Washington (CNN) -- A controversial program by the Bureau of Alcohol, Tobacco, Firearms and Explosives that tried to track illegal weapons sales shows the need for tougher gun laws, according to a report issued Thursday by a House Democrat.

Entitled "Outgunned," the report released by Rep. Elijah Cummings, D-Maryland, quoted law enforcement officers on how lax or nonexistent laws and regulations on so-called "straw" purchases of illegal weapons, firearms trafficking and monitoring of the sales of assault rifles and other long guns contributed to the thriving trafficking of illegal weapons to Mexico.

The report is an attempt by Cummings and other Democrats on the House Oversight and Government Reform Committee to raise the issue of gun control in the investigation of "Operation Fast and Furious," the ATF program that focused on following people who legally bought weapons that were then transferred to criminals and destined for Mexico.

Instead of intercepting the weapons when they switched hands, Operation Fast and Furious called for ATF agents to let the guns "walk" and wait for them to surface in Mexico, according to the House committee.

The idea was that once the weapons in Mexico were traced back to the straw purchasers, the entire arms smuggling network could be brought down. Instead, the committee argued, letting the weapons slip into the wrong hands was a deadly miscalculation that resulted in preventable deaths, including that of Border Patrol Agent Brian Terry.

"Despite the chairman's efforts to wall off any discussion of the nation's gun laws, the record compiled during the committee's investigation documents clearly that these same law enforcement agents believe that their efforts to combat international drug cartels would be enhanced significantly with common-sense improvements in several key areas," the report said.

It called for increased criminal penalties for illegal straw purchases, enactment by Congress of a "dedicated firearms trafficking statute," and for ATF to get reports from gun dealers on purchases of multiple long guns "that are now the weapons of choice for Mexican drug cartels."

Cummings, the ranking Democrat on the committee, told a forum on illegal firearms trafficking he organized Thursday that he knew the recommendations of the new report "will face stiff resistance in Congress and beyond."

"Before today's forum even began, it was criticized as a conspiracy to confiscate the firearms of law-abiding citizens, which is ridiculous," he said.

Cummings also said he and Rep. Carolyn Maloney, D-New York, would introduce legislation on the reforms called for in the report.

In the report, federal agents called existing laws against straw purchasers insufficient and said the country needed a specific statute against weapons trafficking.

"Prosecutors and law enforcement agents should not have to bend over backwards to imprison those who provide military-grade weapons to murderers," Cummings said.

The ATF operation has been criticized by President Barack Obama, who promised "appropriate action" once a Justice Department investigation is complete. Federal law enforcement sources say Kenneth Melson, acting director of ATF, is expected to be forced out as a result.

Issa has called the operation "felony stupid." As many as 2,000 semiautomatic rifles reached the hands of cartels as a result, and Issa said the top two ATF officials were briefed on the program regularly.

CNN's Terry Frieden and Tom Cohen contributed to this report.