Has Bachmann replaced Palin in the Tea Party's heart? 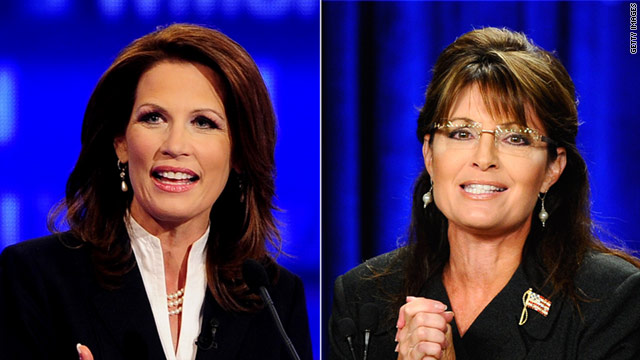 Michele Bachmann, left has entered the race for president, while former Alaska Gov. Sarah Palin has stayed on the sidelines.
STORY HIGHLIGHTS

(CNN) -- With U.S. Rep. Michele Bachmann of Minnesota making a splash in the Republican presidential campaign while Sarah Palin sits on the sidelines, is Bachmann edging Palin out of the Tea Party's heart?

While the former Alaska governor, vice presidential candidate and Fox News commentator is still much loved as a smart, media savvy conservative who breathes fire against President Obama and Democrats, it appears that Tea Party excitement for a Palin presidential run has passed.

One activist told CNN that Palin is "overexposed;" another said that unfair political attacks have left her "damaged;" while another said Palin's "high negatives" might be too high to overcome.

On the other hand, activists laud Bachmann as far more "exciting," with "Tea Party street cred," and -- perhaps most interestingly -- a fresh face ready to learn from those attacks that Palin suffered.

"I think that (Bachmann) has Tea Party street cred in that she's been going to tea parties and speaking to tea parties since the beginning of the movement. She has seemed to have principles and taken actions that are consistent with Tea Party values. She has been one of the few folks in the House to consistently stand against the leadership when they don't comply with Tea Party values."

Meckler continued: "I think (Palin) has a different kind of cred. ... I think her street cred is what I would just call a 'general-conservative' street cred. In that she has been somebody who has been willing to stand against the establishment on both sides of the aisle and talk about conservative values."

Bachmann toning it down?

"Both have been considered big voices in the movement. People like them, they like what they stand for," Steinhauser said. "But now the question becomes, are you talking about as a champion for your values versus running for president?"

As an anecdote, Steinhauser recalled an unofficial, entirely casual poll of enthusiasm his group held with activists assembled in Washington last weekend. Activists were asked to shout their support for their candidates.

"Bachmann and (Texas Gov.) Rick Perry kind of got the loudest applause. And when they got to Palin, it was literally like only a couple of people clapped. For president, she didn't get a lot of applause and excitement," Steinhauser said.

If it's true that Palin's star has somewhat dimmed -- and Bachmann's has increased -- within the Tea Party, it could be because of some cold political realities.

Billie Tucker is an influential leader in the First Coast Tea Party. The group, based in Jacksonville, Florida, counts some 10,000 members in the city.

"It's just that Palin's been over-exposed a little bit maybe," Tucker told CNN. "She came out of the chute and it was exciting when she was going to be our vice president. And when that didn't happen, she went back to being governor and then she stopped that and became a commentator."

Though Tucker is sure to say she -- and other activists she talks to -- believe Palin is smart and did a great job as governor, Tucker wonders if political wounds that Palin suffered would make her possible candidacy impossible.

"I think that the left damaged her," Tucker said. "I just think she'd have a harder road to hoe."

Palin says she is still thinking about a run in 2012

Lu Bosse, a Colorado conservative active in the Tea Party-affiliated "9/12 Project," echoed that sentiment. Her group claims "tens of thousands" of people in the state.

"In terms of Sarah Palin, I think it's a mixed bag. There's people who just love her. And there's just people who aren't too sure about her," Bosse said.

While Bosse said the media launched "vicious attacks" against Palin, she added: "We do realize that if you have too high negatives, how are we even going to help you win the wide swath of citizens who don't pay attention to any of this?"

There is also this notion, according to activists: Whereas Palin staunchly preaches Tea Party values, as a former governor she is not currently fighting for them inside government.

"A lot of what I hear from people, they really wanted to see how (Palin) would finish out her term as governor," Steinhauser said. "I think a lot of folks would say, leaving that and going to do something else sort of takes you from being a governor to being a media personality and a commentator, which is fine. ... It's not to say you can't get to the presidency that way."

Steinhauser stressed that he, and many activists, believe that Palin did an exceptional job as governor. And yet: "If she were still the sitting governor of Alaska, doing these great things, maybe she could kind of point toward that and say, 'Here's what's going on in Alaska. Here's what we're doing. Here's where we are in 2011.' So the Sarah Palin in 2011 who's governing Alaska maybe would be a much stronger candidate than the current (Palin), if she runs."

Bachmann, activists say, is instead viewed as being in the trenches -- fighting for Tea Party causes, even battling her party's leaders.

"The thing about Michele Bachmann that people in the Tea Party movement respect is the fact that she, for the most part, is voting the way they would expect her to vote. She has taken on the Tea Party mantle ... and pushed it at a congressional level," said Tea Party Patriots co-founder Jenny Beth Martin.

Others even likened Bachmann to a sort of political military leader -- leading troops into battle.

Tucker put it this way: "We all responded to Michele. Remember in February or March of last year -- she's the one that said, 'Come back. I need you,' regarding the health care bill.

Tea Party Express chairman Amy Kremer said though Bachmann has a lot of buzz now, that could change.

"I posed the question, several weeks ago on my Facebook wall: Bachmann or Palin?" Kremer said.

"And it was split. I think they both generate enormous amounts of enthusiasm and excitement. But you're seeing that more from Bachmann right now because she's actually a candidate."

"If Palin were to throw her hat in the ring, it changes everything."