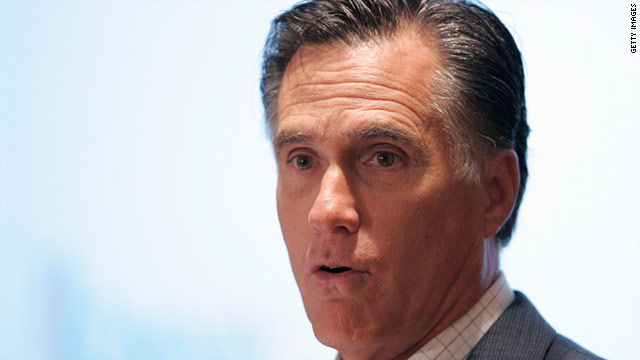 (CNN) -- It was all about the economy and about New Hampshire when Mitt Romney made it official Thursday. The former Massachusetts governor and 2008 Republican presidential candidate formally announced his second bid for the White House, declaring his candidacy at an event in New Hampshire, the state that holds the first primary in the presidential caucus and primary calendar.

The man who many consider the early front-runner in the race for the GOP presidential nomination sharply criticized President Barack Obama over the state of the economy, saying "Barack Obama has failed America."

Romney attacked Obama for expanding the role of the federal government, adding, "we are only inches away from ceasing to be a free market economy. I will cap federal spending at 20 percent or less of the GDP and finally, finally balance the budget."

It's no surprise that Romney focused on the economy. He was criticized during his first bid for the White House for trying to be everything to everyone, weighing in often on domestic, international and social issues. This time around it appears to be different.

National polls indicate that the economy remains the top issue on the mind of Americans.

"The issue that most Americans are concerned about happens to be in my wheelhouse," Romney boasted last week at a campaign event in Iowa.

Romney has repeatedly criticized the president's handling of the economic recovery, blaming Obama for creating a climate of uncertainty for small business owners. He highlights his private sector experience, saying it gives him a better understanding of how to create jobs.

"From my first day in office my number one job will be to see that America once again is number one in job creation," Romney said when he announced his candidacy.

Romney made it official at a noontime barbecue at Stratham farm, a must-stop location for GOP contenders. But he isn't the only big name Republican in New Hampshire Thursday. Two people flirting with bids for the Republican presidential nomination, former New York City Mayor Rudy Giuliani, and former Alaska Gov. Sarah Palin, also hold events in the Granite State. Palin has grabbed the spotlight this week as she's made her way from the nation's capital to New England during a well-publicized tour that could be the first step toward a possible run for the White House.

This is the second time this spring Romney has used New Hampshire as a backdrop to make news, which tells us a lot about his strategy for his second bid for the GOP presidential nomination. On April 11, Romney announced the formation of a presidential exploratory committee with a video he taped that day at the University of New Hampshire in Durham.

Romney is well known in New Hampshire. He was governor of neighboring Massachusetts from 2003 to 2007, is seen often on TV in New Hampshire (much of the more populated southern part of the state is in the Boston media market), he has a vacation home in the state's "lakes region" and he spent lots of time in the state in 2007 and 2008 in his first bid for the White House and last year as well, when he lent a helping hand to New Hampshire Republicans in the midterm election campaign.

"Republicans in the Granite State have been closely watching Gov. Romney for 10 years since he was elected in Massachusetts in 2002. He needs to win in a state where voters know him best," says Rich Galen, a Republican strategist who advised Fred Thompson during his 2008 GOP presidential bid, and who is the author of Mullings.com, an on-line column.

The strong name recognition and his past efforts in the state are most likely one reason why Romney's far ahead of the rest of the field in a CNN/WMUR poll. The survey, conducted by the University of New Hampshire and released late last month indicates that 33 percent of probable GOP primary voters in New Hampshire back Romney, with Rep. Ron Paul of Texas a distant second at nine percent.

The poll also indicates that a desire by New Hampshire Republicans to pick someone who can beat President Barack Obama in the 2012 presidential election may be behind his poll numbers.

"Republicans are looking for someone who can take on President Obama, and right now, Romney is seen as the only Republican who can do that," adds Smith.

Last week Romney made his first visit this cycle to Iowa, with three stops across the state that kicks off the presidential primary and caucus calendar. Romney also recently made his first stop in South Carolina, the first southern state to vote in the road to the White House.

"You will see me more than you like, I'm afraid, in Iowa," Romney said during a forum at the State Historical Building in Des Moines. "I will be here plenty and you will get to know what I stand for. Iowa plays a critical role in the process of selecting our nominee and selecting our president."

But Romney told reporters during his visit to the Hawkeye state that he'll run a "lean" campaign in 2012 and said his strategy would not hinge on any single state. He deflected questions about the Ames Straw Poll, a crucial test of each campaign's Iowa organization that will take place in August. Romney spent heavily to win the straw poll vote in the summer of 2007. But he ended up losing the caucuses to former Arkansas Gov. Mike Huckabee. He also had a large campaign in New Hampshire, but came in second to Sen. John McCain of Arizona. This time around it seems Romney will be concentrating his firepower in the Granite State rather than Iowa or South Carolina.

"Whoever wins New Hampshire and the money and momentum that comes with it, has the nomination in his hands," says Alex Castellanos, a Republican strategist and CNN contributor.

Castellanos was a top media adviser to the 2004 Bush-Cheney re-election campaign and to Romney's 2008 bid for the GOP presidential nomination, but has not taken sides in this cycle.

Romney is at or near the top of the most recent national polls of the Republican nomination horserace. He also appears to be the leading Republican presidential candidate when it comes to the battle for campaign cash. Romney aides say the campaign brought in more than $10 million from donors across the country during an all day phone bank held last month in Las Vegas.

Romney also spent much of April touring the country meeting with donors and fundraisers. He hopes to bring in an impressive haul for the crucial second quarter to show his strength as a candidate.

Romney raised $65.1 million in contributions for his 2008 bid for the GOP nomination. In addition he loaned his campaign $42.3 million from his personal funds.

Thanks to his standing in the polls, his fundraising strength, and his formidable campaign operation, Romney is considered by many to be the front-runner at this stage of the election cycle. And that's one reason why Democrats have increasingly attacked Romney.

"Since Mitt Romney bowed out of the Republican Primary in 2008, he and his handlers have been meticulously planning today's announcement - banking on a 2012 New Hampshire primary victory to slingshot him to the nomination," says Ray Buckley, chairman of the New Hampshire Democratic party. "However, the problem for Mitt Romney is that the reason Granite Staters rejected him three years ago remains the same today: they believe he is a wishy-washy, flip-flopping politician who will say anything or take any position to suit his own immediate political needs."

National Democrats are also characterizing Romney as a "flip-flopper." The Democratic National Committee is out Thursday with a <a href="http://www.youtube.com/watch?v=rsCmiFcRyIc">web video</a> titled "Romney: Same candidate, different positions."

Democrats, as well as rival Republicans, have also fired away at Romney over a universal health care measure the then Massachusetts governor signed into law five years ago.

Democrats, including the president, have recently praised Romney's 2006 law for setting the stage for health care reform on the national stage.

"In fact, I agree with Mitt Romney, who recently said he's proud of what he accomplished on health care in Massachusetts and supports giving states the power to determine their own health care solutions," Obama said earlier this year.

The law insured almost every resident of Massachusetts. At the time, it was praised by supporters of health care reform as a landmark achievement for Romney. The lynchpin of the law was an insurance mandate that required the people of Massachusetts to get health insurance.

The insurance mandate in "Romneycare" wasn't a major liability in his first presidential run in 2008 because Obama's health care law wasn't born yet.

But it's a major issue now. Rival campaigns have attacked him and the issue could hurt him with tea party activists and other grassroots conservatives, who will be very influential in picking the next Republican presidential nominee.

Romney addressed his record in a March speech, explaining the law was a "state plan intended to address problems that were in many ways unique to Massachusetts."

"Our experiment wasn't perfect. Some things worked. Some didn't. And some things I'd change," Romney said. "One thing I would never do is to usurp the constitutional power of states with a one-size-fits-all federal takeover."

Last month Romney traveled to Michigan to give a major speech on health care, in which he issued a defense of the health care "experiment" he implemented while governor, saying "I, in fact, did what I thought was right for the people of our state."

But he also attempted to put distance between the president and himself, while moving closer to the Republican base, by calling the health care reform law passed last year a federal "power grab," describing it as "an economic nightmare" and the reason "why this recession has taken so long to move on from."

In the speech and in an op-ed the same day in the USA Today, Romney said he would "issue waivers for all 50 states" to opt-out of health care reform on his first day in office should he be "lucky" enough to become president.

The spotlights on health care and the economy aren't the only differences between the Romney of 2008 and 2012. Another is his appearance. Mostly gone are the suits and ties that the candidate wore in his first bid for the White House. The new Romney is a more casual candidate who didn't even wear a tie in his April video to announce the formation of his presidential exploratory committee. On Memorial Day, he even sent a tweet to his followers off a Romney family photo, in which he was wearing a polo shirt with slightly disheveled hair.