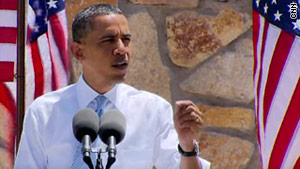 "In embracing America, you can become American. That is what makes this country great," the president said Tuesday.
STORY HIGHLIGHTS

Check out local reports on CNN affiliates KDBC and KVIA.

(CNN) -- President Barack Obama renewed his push for comprehensive immigration reform Tuesday, citing America's legacy as a nation of immigrants and saying that finding a solution for millions of undocumented workers is critical to the country's common future.

"We define ourselves as a nation of immigrants -- a nation that welcomes those willing to embrace America's precepts," Obama said during a visit to El Paso, Texas.

"It doesn't matter where you come from. What matters is that you believe in the ideals on which we were founded, that you believe all of us are equal," he said. "In embracing America, you can become American. That is what makes this country great."

The president's speech was part of his administration's attempt to regain the initiative on a hot-button issue that has largely been ceded to state government leaders in recent months. It took place against a backdrop of intense political maneuvering on the part of both Democrats and Republicans seeking to use the issue to their own advantage in the 2012 election campaign.

Why Obama chose to speak in El Paso

Among other things, Obama ripped GOP leaders for setting impossible standards for border enforcement before being willing to cut a deal with their Democratic counterparts.

"All the stuff they asked for, we've done," he said, citing a range of steps taken to improve security along the Mexican border. "I suspect there will be those who will try to move the goalposts one more time. ... Maybe they'll say we need a moat. Or alligators in the moat."

"They'll never be satisfied," he said. But "that's politics."

"The most significant step we can take now to secure the borders is to fix the system as a whole so that fewer people have incentive to enter illegally in search of work in the first place," Obama said. "This would allow agents to focus on the worst threats on both of our borders -- from drug traffickers to those who would come here to commit acts of violence or terror."

The president stressed that, as part of comprehensive reform, Washington has to "secure the borders and enforce the law." Business owners, he said, need to be punished for exploiting undocumented workers.

At the same time, people who have entered the country illegally have to admit they broke the law, pay taxes and a fine, learn English and be willing to undergo background checks before starting the legalization process, he added.

"Basically the president laid out a plan for open immigration," said Ira Mehlman, a spokesman for the Federation for American Immigration Reform.

Mehlman called the president's remarks "a speech given by candidate Obama, not necessarily President Obama."

Some reform advocates were also unimpressed with the president's remarks.

"We have heard a lot of these words before," said Ivan Ceja, a student at the University of Fullerton in California. "He has the power to stop deportations. He needs to take action."

Obama's speech came in the wake of a series of recent meetings with key Latino officials and reform advocates. Despite an aggressive push for substantive policy changes from his political base, the president has repeatedly said he won't act on his own to implement provisions of a reform bill that failed to win congressional approval last year.

Some reform advocates "wish that I could just bypass Congress and change the law myself. But that's not how a democracy works," the president said.

The president has, however, changed Washington's enforcement priorities.

A recent increase in deportations "has been a source of controversy," he acknowledged. "But I want to emphasize: We are not doing this haphazardly. We are focusing our limited resources on violent offenders and people convicted of crimes -- not families, not folks who are just looking to scrape together an income."

A number of states -- most notably Arizona -- are moving in the opposite direction, pushing legislation making it easier to deport people solely for being in the country illegally.

Key parts of a new Arizona law requiring police officers to check a person's immigration status while enforcing other statutes were recently blocked by the federal courts. The Justice Department sued the state, arguing that only the federal government has the authority to dictate immigration policy.

Federal district and appellate judges have blocked that provision of the law, and Arizona's governor asked the U.S. Supreme Court to take the case Monday.

For their part, national Republican leaders have indicated an unwillingness to consider broader changes -- including a path to citizenship for undocumented immigrants -- until the Mexican border is brought under tighter control.

Progressive reform advocates, meanwhile, have been frustrated by Congress's inability to pass the DREAM Act, which would offer legal standing to immigrants who entered the United States illegally as children under the age of 16 and have lived in the country for at least five years.

One Latino advocacy group -- Presente.org -- released a statement before Obama's speech criticizing the president for failing to issue an executive order stopping the deportation of young undocumented immigrants until legislation such as the DREAM Act is passed.

"All we have heard from President Obama are empty speeches," the statement said.

"The president will have to present a plan that takes amnesty off the table and focuses, instead, on making a real commitment to border and interior security," Senate Minority Leader Mitch McConnell, R-Kentucky, said Tuesday morning.

"If the president does these two things, he will find strong bipartisan support. If he doesn't, he won't."

The DREAM Act was defeated by a Republican filibuster in the Senate last December after winning passage in the House of Representatives. Most analysts believe it has little chance of clearing the GOP-controlled House now.

Obama said Tuesday he will keep pushing for passage of the measure. "It was a tremendous disappointment to get so close and see politics get in the way," he said.

"The idea that we would punish (children of illegal immigrants) is cruel and makes no sense," he added. "We are a better nation that that."

For their part, Republicans have depended on the immigration issue in the past to fire up conservative voters. Some analysts also believe that if Democrats push too hard, too fast on immigration, particularly in tough economic times, it could push swing voters toward the GOP.

CNN's Tom Watkins and Catherine Shoichet contributed to this report.