Make more than $250k? Obama wants you to pay more in taxes, like it or not 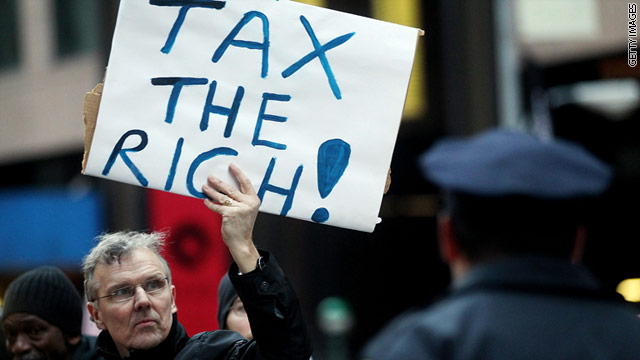 President Obama renewed his call to let the Bush-era tax cuts for those making more than $250,000 a year lapse.
STORY HIGHLIGHTS

Washington (CNN) -- President Barack Obama made it very clear on Wednesday: If you are rich, you should be paying more in taxes.

In a major speech at George Washington University, he restated his desire not to renew the Bush-era tax cuts again for the wealthiest Americans as he seeks to reduce the nation's budget deficit.

So what do the wealthy -- or who Obama calls those making $250,000 a year -- think about the idea of paying more in taxes? CNN asked some people making high incomes, along with tax experts, what they thought.

"It kinda feels like it's my job to kind of spread around what I got. I just think as a whole, our society is in a much better place when we have the money to spend on the social stuff that needs to get spent," said Eric, who owns several restaurants in New York state and said he earns nearly $1 million a year. He asked that his last name not be used.

Obama calls for $4 trillion in cuts over 12 years

The restaurateur said that his businesses won't be hurt if Obama gets his way -- and the only effect on his life would be reducing the amount of money he puts into savings.

"If I really have to change my lifestyle because I'm being overly taxed, then I'm kind of doing something wrong to begin with."
--Eric, a restaurant owner

"If I really have to change my lifestyle because I'm being overly taxed, then I'm kind of doing something wrong to begin with," he added.

Craig, a venture capitalist in New York City, said he makes well over $250,000 and also asked that his last name not be used. He is of two minds over the president's new plan.

"I'm torn because part of me says yes the higher paid people should pay their fair share," he said. "So I understand that. However, my issue is that $250,000 isn't the same amount that it was 10 years ago."

Jason Francois, who answered a Facebook post Wednesday by CNN's Carol Costello, agreed that the White House and Congress should take another look at what is considered wealthy.

"Somebody close to me makes a bit over $250k a year with stock, etc., and paid $85k in taxes last year. Is that not enough? They have a decent lifestyle, but it's far from what most people would call 'wealthy,' " said Francois of Tacoma, Washington.

Some of those making $250,000 and more work in the financial sector or top corporate jobs, found in high cost-of-living cities such as New York, Los Angeles, San Francisco and Boston.

"In New York, the cost of living is very different than everywhere else, so someone who has $250,000 in New York is not that exciting, but that amount in Indiana that's a huge difference," Craig said.

Obama on debt: We can solve this problem

The politics of debt and deficits

Obama's faced a tough relationship with the business community since taking office -- and the proposed roll back of the tax cuts is not going to be well-received in the financial sector, many say.

But don't tell that to some of the nation's richest Americans.

Warren Buffett, the chairman and CEO of Berkshire Hathaway, told ABC's Christiane Amanpour in November that the rich should be taxed more.

"If anything, taxes for the lower and middle class and maybe even the upper-middle class should even probably be cut further," Buffett said. "But I think that people at the high end -- people like myself -- should be paying a lot more in taxes. We have it better than we've ever had it."

The group known as Patriotic Millionaires for Fiscal Strength backs the president's plan and the members renewed their pledge in a letter to Obama.

"For the fiscal health of our nation and the well-being of our fellow citizens, we ask that you increase taxes on incomes over $1,000,000," the group wrote in a recent letter to the president and congressional leaders. "We make this request as loyal citizens who now or in the past earned incomes of $1,000,000 per year or more."

That letter backs Obama's point that the wealthy "want to give back to the country that's done so much for them. Washington just hasn't asked them to."

Well, not exactly. Obama has repeatedly asked Congress to roll back the tax cuts during last year's lame-duck Congress. He eventually let that idea collapse in his bipartisan compromise in December 2010, agreeing to an extension of the cuts for two more years.

Republicans, who took control of the House after the 2010 midterm election, are firmly unified against raising any taxes. And with a Democratic-controlled Senate, don't expect the plan to move forward easily. Gridlock in the Senate is always expected -- just like death and taxes.

Others argue that rolling back the Bush-era tax cuts would punish those who have worked hard and made the American dream a reality.

"Increasing taxes on the wealthy means punishing the more fortunate and successful people of a society, and more so, violates their free will to independently help individuals who they would like to help," Sean O'Connor, whose location was not listed, wrote on Facebook. "Punishing success in any field is evil."

Nathan Rennicker of Dover, Ohio, also weighed in on Facebook, saying his dad would be the "one getting screwed" if Obama gets his way. That "hurts me for schooling, he makes 'to much' for the gov't yet not enough to support the family fully, about time the people who live luxurios lives suffer as well."

Roberton Williams, senior fellow at the Tax Policy Center, argues that rolling the tax cuts back won't make a significant dent in the deficit.

His reasoning: The income of the top 2% of taxpayers is typically more volatile than that of taxpayers making less. And when the economy sours, so do those high-end paychecks. In addition, there just aren't enough rich people to generate the revenue needed to substantially reduce deficits.

"Plenty of people just starting out have a good salary but have things like student loans, mortgages, young children, etc., that make raising taxes for this group a hardship," she said on the Facebook post. "A household making 250,000 with $100,000 of student loan debt left to pay off isn't necessarily rich."

But others posting on Facebook said rolling back the cuts is a step in the right direction.

Judy Ashley of Battle Creek, Michigan, said that rolling back the tax cuts will help.

"Why should the little people who struggle every day to simply survive be the only people who have to give up more of our incomes?"