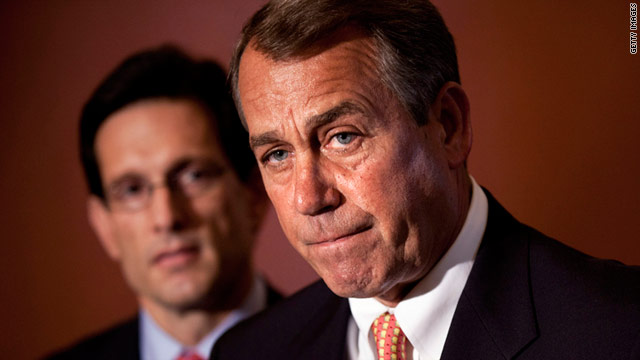 Washington (CNN) -- To the Tea Party movement that helped fuel Republican electoral success last November, a promise is a promise.

So when it became clear last month that House Speaker John Boehner, a conservative GOP hero, was willing to accept far smaller spending cuts for the rest of the current fiscal year than what Republicans pledged in the 2010 election campaign, the Tea Party reaction was both swift and decisive.

"There is no other way to put this," Tea Party Nation founder Judson Phillips wrote on the group's website in early March. "The Tea Party movement should find a candidate to run against John Boehner in 2012 and should set as a goal, to defeat in a primary, the sitting Speaker of the House of Representatives."

Such commitment to the cause of shrinking the government explains why Tea Party supporters, including some members of Congress they helped elect, welcome a possible government shutdown as soon as midnight Friday. Bringing to a halt what they consider to be a bloated and misguided federal government would be a tangible success for their citizen activism that claims allegiance to no single party.

"I'm not the slightest bit worried about a government shutdown," Tea Party supporter Robin Maas said at a March 31 rally in Washington. "I think we find out that there are many things government does that we really don't need to keep this country going. And a government shutdown would actually save us some money."

John Sanders, another of the several hundred at the outdoor rally on a cold, drizzly day, said it all came down to the Republican pledge to cut $100 billion from the federal budget for the remaining months of fiscal 2011, which ends September 30. First, House Republicans backed off of that by passing a bill that included $61 billion in cuts, saying it was pro-rated for the already expired months in the fiscal year that began last October. Then came word that Boehner might accept a figure of $33 billion in cuts.

"I want the $100 billion they promised us," Sanders said. "I say shut the government down. Let's go for it."

To Republican leaders such as Boehner, the passion of Tea Party supporters for their cause makes it difficult to continue corralling their energy and support while also working within the legislative and political realities of Washington. On the day of the Tea Party rally, Boehner said he'd work to get the biggest spending cuts possible, but also pointed out that Republicans only control the House and not the Senate or the White House.

"We can't impose our will on the Senate," Boehner said. "All we can do is fight for all the spending cuts that we can get an agreement to and spending limitations as well." To some of the Tea Party faithful, that sounded like giving up. Kathy Dirr, an activist from Boehner's Ohio district, had a message for the House Republican leadership: "Take off your lace panties" and push for deeper cuts, she said.

Fact Box
What percent of Americans think a government shutdown for a few days would be good for the country?


Boehner's Republican colleagues in Congress recognize his conundrum. Conservative Sen. Jeff Sessions of Alabama acknowledged that the Tea Party movement may not "understand all the realities of Washington politics," but on the substance of the issues -- the need to reduce the size of government and bring down spending -- "they are right fundamentally," he told the ABC program "This Week" on Sunday.

To House Budget Committee Chairman Paul Ryan of Wisconsin, his congressional colleagues elected with Tea Party-backing are driven by more than political concerns. "They came here for a cause," Ryan said Tuesday in unveiling a GOP spending plan for the next fiscal year that would radically overhaul the Medicare and Medicaid entitlement programs, among other steps favored by conservatives.

"This is not a budget. This is a cause," Ryan told reporters. "Look, we can all go do something else with our lives. We are not just here so we can get this lapel pin that says we are a member of Congress. We are here to try and fix this country's problems."

However, the policies supported by Tea Party groups are originalist in concept and rigidly conservative. The almost exclusively white supporters claim to represent the foundation of U.S. society, but a CNN poll last week showed more people disapproved of the movement than approved.

Still, some conservative politicians openly play to the Tea Party exuberance, depicting the current budget negotiations on spending for the next few months as a final showdown that requires unyielding commitment.

"Cut it or shut it," Republican Rep. Mike Pence of Indiana shouted at the Tea Party rally, then later told CNN that "If we don't take a stand right now ... we are going to shut down the future for our children and grandchildren and that will be a lot worse."

The perceived stakes are clearly expressed on Tea Party websites, such as the mission statement for the Tea Party Patriots. "Such runaway deficit spending as we now see in Washington D.C. compels us to take action as the increasing national debt is a grave threat to our national sovereignty and the personal and economic liberty of future generations," it says.

To Democrats, the Tea Party wing of House Republican's 241-seat majority in the 435-member chamber is determining the GOP leadership's agenda. The House bill's $61 billion in spending cuts are draconian and ideologically driven, and would cause economic harm as the nation recovers from recession, they say, let alone even steeper cuts called for by Tea Party supporters and their elected leaders.

"I think that the Tea Party is driving what goes on in the House of Representatives," Senate Majority Leader Harry Reid of Nevada complained Tuesday. Because of pressure from their most conservative wing, GOP negotiators were shifting their demands away from an agreement, Reid said.

"The Republican leadership has the Tea Party screaming so loudly in its right ear that it can't hear what the vast majority of the country demands," Reid said on the Senate floor on Wednesday. "The country demands that we get this done."

And he called out Boehner in particular.

"So the Speaker has a choice to make and not much time to make it: He can either do what the Tea Party wants or what the country needs."

Obama also criticized Republican intransigence Tuesday, telling reporters that "We can't have a 'my way or the highway' approach to this problem, because if we start applying that approach, where 'I've got to get 110% of everything I want or else I'm going to shut down the government,' we're not going to get anything done this year, and the American people are going to be the ones that suffer."

In the end, regardless of what figures are agreed on by budget negotiators and whether or not a government shutdown occurs, the influence of the Tea Party movement on House Republicans is undeniable. The spending cuts will be much deeper than previously thought possible, as Obama and moderate Democrats have conceded the political necessity of addressing conservative fiscal concerns.

"We are changing the dynamic here," House Majority Leader Eric Cantor, the No. 2 Republican in the House, said Tuesday.

"It's tough business. Our members are ready to do what's necessary to solve problems."