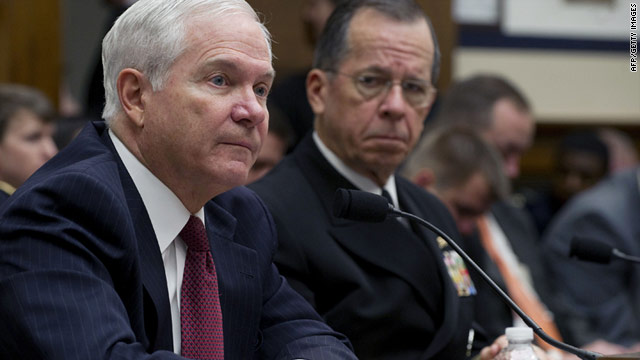 Washington (CNN) -- Defense Secretary Robert Gates on Thursday defended the administration's decision to intervene in Libya, arguing that military action was necessary to prevent a humanitarian disaster that could have sparked a refugee crisis while potentially destabilizing Egypt, Tunisia and the broader Middle East.

Gates, appearing with Joint Chiefs of Staff Chairman Adm. Mike Mullen before skeptical members of the House and Senate Armed Services committees, insisted that the "time and conditions were ripe for international military action."

Moammar Gadhafi will "kill as many (people) as he must to crush the rebellion," Mullen warned.

Committee members -- largely from the Republican side of the aisle -- peppered the two men with hostile questions, highlighting persistent doubts about the cost, goal, duration and legality of the mission.

The GOP appeared to be divided, however, on whether to pull back from the mission or increase the U.S. role.

"With Iraq and Afghanistan already occupying a considerable share of American resources, I sincerely hope that this is not the start of a third elongated conflict, especially in a region where we have other more discernible strategic interests," said California GOP Rep. Buck McKeon, chairman of the House committee.

Libya hearings aplenty on the Hill

"We are not doing everything necessary to achieve our policy goals," said Arizona's John McCain, the top Republican on the Senate side. "I hope we don't learn a bitter lesson."

The testimony by Gates and Mullen came as NATO took sole command of Libyan air operations. CIA operatives, meanwhile, have been working with rebel leaders on the ground in Libya to try to reverse gains by forces loyal to Gadhafi, a U.S. intelligence source said.

CNN reported over the weekend that rebels had driven west through al-Brega, Ras Lanuf and Bin Jawad -- stopping just short of Gadhafi's hometown of Sirte. In the last three days, however, opposition fighters have been pushed back east toward the rebel stronghold of Benghazi.

Gadhafi's forces, however, still outnumber the rebels by a ratio of approximately 10 to one in terms of armor and other ground forces, Mullen said.

"It's pretty much a pickup ballgame" right now, he said, noting that the rebel forces remain "disparate" and "scattered." He said other countries could play a larger role in helping the rebels as the U.S. role is reduced.

The United States, he insisted, will continue to transition to a "supporting role" that "comports with our interest."

The administration's decision to withdraw "our unique offensive capabilities at this time sends the exact wrong signal, both to our coalition partners as well as to the Gadhafi regime -- especially to those Libyan officials whom we are trying to compel to break with Gadhafi," McCain replied.

Gates reiterated the administration's promise that no U.S. ground forces would be used in Libya, telling committee members that the rebels had indicated they didn't want such an intervention.

Michigan's Carl Levin, the Democratic chairman of the Senate Armed Services Committee, raised the issue of whether or not the United States should help arm the rebels. Any decision, he said, needs to be "consistent with the mission" as defined the United Nations.

It also needs to be made without endangering international support, Levin said.

Coalition members have been sharply divided over whether the rebels can be armed without violating the U.N. mandate.

Several House Republicans questioned whether the administration had adhered to the 1973 War Powers Act when it launched military strikes.

There has been "no consultation at all," said Rep. Walter Jones, R-North Carolina. Congress has "been left out in the cold on this one."

Gates said that President Barack Obama's compliance with the War Powers Act "has been consistent with the actions taken by all of his predecessors -- both Democrats and Republicans" since the law was passed in 1973.

Gates conceded, however, that the requirements of the law have "been an area of contention" between the legislative and executive branches since the measure was passed.

A congressional resolution of support for Libyan intervention would be welcome, he said.

A number of Republicans responded by asserting that a vote on such a resolution would probably fail.

"I certainly would not be supporting it," said Rep. Michael Turner, R-Ohio. "This mission is unclear, and the goals are unclear."

The rebels are "getting their butts whipped," argued Rep. Jeff Miller, R-Florida. "I don't think (Obama) has the support of this Congress."

"This administration has not been honest with the American people that this (mission) is about regime change," argued Rep. Mike Coffman, R-Colorado. "This is just the most muddled definition of an operation probably in U.S. history."

Rep. Chris Gibson, R-New York, complained that the mission's "military and political goals are not harmonized."

Administration officials have repeatedly drawn a distinction between the international military goal of civilian protection and the U.S. political goal of ousting Gadhafi.

Both Democrats and Republicans questioned the identity of the rebel leaders, reflecting a concern about a possible al Qaeda presence within the opposition movement.

"I have a lot of concern about who the rebels are," said Rep. David Loebsack, D-Iowa. "Who are these folks?"

Gates indicated that there are still significant questions about the composition and ideological leanings of the opposition.

The U.S. government does not "have much visibility into those who have risen against Gadhafi," he said, noting that there are "multiple agendas" at stake.

But he said it was unlikely that groups such as al Qaeda or Hezbollah would be able to capitalize on the turmoil. Libyan tribes hostile to the presence of such organizations would play a key role in forming the next government, Gates said.

Right now, however, the rebels' ability to govern is "limited (or) nonexistent," he stressed.

Committee members also complained about the cost of the military mission, which has been estimated by the administration at $550 million over the past month and $40 million for each month moving ahead.

"We can't pay our bills right now," Jones said. Gadhafi is "absolutely evil," but other countries need to play a larger role, he insisted.