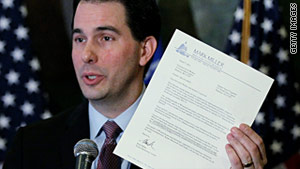 (CNN) -- The litigious and contentious battle in Wisconsin over collective bargaining rights has a new twist -- the publishing of the law despite a judge's order against such a move.

That left lawmakers and observers wondering Saturday whether the law had taken effect.

This latest drama started Friday afternoon when the state's Legislative Reference Bureau published the controversial act that curbs the collective bargaining rights of most employees.

The Legislature's website Saturday noted the publication of the law and cited these two points:

-- Wisconsin law requires the Legislative Reference Bureau to publish every act within 10 days of its passage.

"There was no temporary restraining order on the Legislative Reference Bureau from publishing, only on the secretary of state," Senate Majority Leader Scott Fitzgerald told CNN affiliate WISN. "There was no reason that the (bureau) could not publish, and actually has an obligation to do that, as they did today (Friday)."

Wisconsin Dem: 'The war isn't over yet'
RELATED TOPICS

The state's Department of Justice, headed by Attorney General J.B. Van Hollen, issued a statement Friday saying that "no action by the Secretary of State is required by this section for the legislative reference bureau to publish an Act."

The amended bill, which had been stalled for weeks by 14 Democratic state senators who left Wisconsin to prevent a quorum -- and thus a vote on the measure -- then sailed to easy passage in both chambers of the Legislature.

In the appeal, Van Hollen argues that Sumi has no jurisdiction over state lawmakers or Wisconsin's secretary of state, all of whom have sovereign immunity. Sumi's order bars La Follette from publishing the new law.

The public brouhaha over Walker's $137 million budget repair bill all but shut down the Wisconsin state Legislature for weeks. It also drew protesters by the tens of thousands, among them union supporters and public employees, who called the proposed measure an attack on workers.

The Wisconsin State Employees Union Council 24 blasted the publishing of the law.

"By attempting to unilaterally publish their bill eliminating the rights of hundreds of thousands of Wisconsinites, (Gov.) Walker and his cronies have unquestionably violated the laws of this state to further their extreme overreach for absolute power over our state's people."

Democratic state Sen. Chris Larson said, "The courts are going to step in again and say, 'No, you have to follow the letter of the law' and again they broke it. ... I think it's pretty shameless of Walker and the Republicans."

"We have the attorney general telling us we are doing everything legal," Vos told WISN. "And I am positive, as I have been before, that we'll move forward. We'll show that this was done according to the letter of the law, and people will realize this was a necessary step forward."