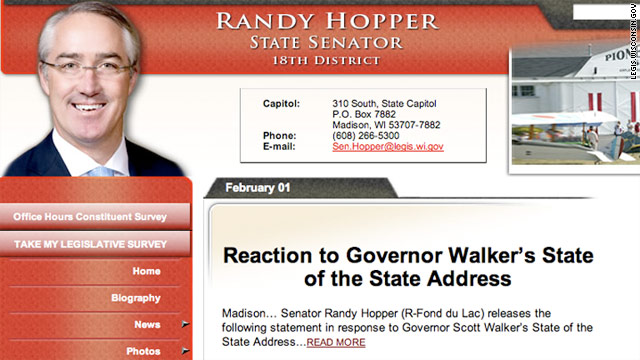 Wisconsin state Sen. Randy Hopper, a Republican from Fond du Lac, is not only facing backlash from constituents angry over his support for Gov. Scott Walker's union busting bill -- but from his wife.

According to RawStory.com, protesters who came to his home this past weekend were met by Mrs. Hopper, who told them that her husband "was no longer in residence at this address, but now lives in Madison, Wisconsin, with his 25-year-old mistress."

To make matters worse for Sen. Hopper? A recall effort is under way and one of its top supporters is his wife.

According to Blogging Blue, Mrs. Hopper -- along with her maid -- intend to sign the recall petition.

And my first order of business ...

Rep. Michele Bachmann, considered to be mulling a 2012 presidential run, told conservative radio host Jeff Katz that unlike President Obama, she could provide a key document if she were to run for the nation's highest office.

And cue the birther debate:

"I'll tell you one thing, if I was ever to run for president of the United States, I think the first thing I would do in the first debate is offer my birth certificate, so we can get that off the table," she said.

Mediaite.com has the audio clip.

A best defense is a good offense

Newt Gingrich, who recently announced that he is exploring a 2012 GOP nomination run, told a radio station that he's expecting his opponents to bring up his extra-marital affairs -- something he's not afraid of, according to The Hill.

"I expect my opponents to go back 15, 20, 25 years and try to render an alternate judgment," Gingrich said Monday on WRKO. "I understand that's what they'll do."

So far, none of the potential 2012 GOPers have criticized the former House speaker.

Reuters: U.S. millionaires say $7 million not enough to be rich

"The great thing about bow ties is they stay out of the way. ... You're less likely to get an errant splash of chili or marinara sauce on yourself. From a practical stance, you can't beat bow ties" -- Rep. Rick Crawford, R-Arkansas, in Roll Call

"The Obama administration mobilized for battle Sunday, with the White House, Pentagon and State Department on the same page. Who was the enemy? Moammar Gadhafi? Some other Mideast tyrant? Guess again: It was State Department flack P.J. Crowley" -- New York Post editorial