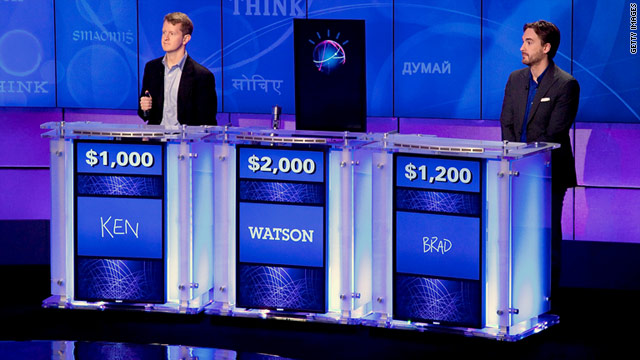 Washington (CNN) -- Some brave -- and curious -- members of Congress made their way to a Capitol Hill hotel Monday evening to square off against "Jeopardy!" sensation Watson, the IBM-powered supercomputer that handily defeated the game show's two most successful contestants in history.

Brown, a member of the 25-person team that developed Watson, hosted the congressional contest Monday night.

In the first round, Reps. Rush Holt, D-New Jersey, and Bill Cassidy, R-Louisiana, sparred with the computer, appearing in its now-familiar avatar form. Watson quickly delighted the crowd of IBM employees and congressional staffers with its quick, humanlike answers.

When given the clue, "Ambrose Bierce described this as a temporary insanity cured by marriage," Watson beat both congressmen to the buzzer, answering confidently, "What is love?"

Holt -- a five-time champion on TV's "Jeopardy!" -- managed to hold his own against Watson for most of the round, but even he could not match Watson's quick wit in the "Always in Fashion" category. In fairness though, perhaps Watson was at a higher advantage in Washington, which is known more for its political savvy than its fashion prowess.

After beating Watson by amassing "winnings" of $8,600 to $6,200, Holt expressed admiration for the machine, saying the technology has the potential to be extremely useful at times when tough decision-making is required in fields such as medical diagnosis, air traffic control or situations that require piecing together bits of knowledge.

This technology can also be extremely helpful in emergencies, such an outbreak of a foodborne illness or a natural disaster, said Chris Padilla, vice president of IBM Governmental Programs.

"In the modern world, we're all flooded with information," Padilla said. "What Watson can do, is go through all of that data, and in response to a natural-language question, rank the order of likely responses in terms of what you asked it in the first place."

In the case of a foodborne illness, Watson could "evaluate all the symptoms people are experiencing, help you evaluate what the various causes could be and determine what types of controls should be put in place in terms of certain food not being sold," Padilla said.

Brown said his team is close to getting the technology to a point where it is ready for everyday use in the worlds of business and government. But for now, we can continue to enjoy watching Watson show off his formidable trivia skills.