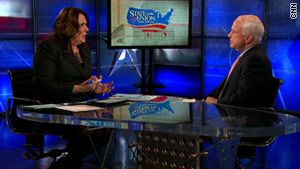 Sen. John McCain says the United States must be an "assisting but insisting partner" in Egypt.
STORY HIGHLIGHTS

"Piers Morgan Tonight" brings you the latest developments from CNN correspondents on the ground in Egypt at 9 p.m. ET Monday. Then at 10 p.m. on "AC360º," Anderson Cooper reports live from Cairo with firsthand accounts of what's happening and where the situation might go from here.

(CNN) -- From the political unrest in Egypt to why House Majority Leader John Boehner cries, here are some of the best sound bites from the Sunday morning talk shows:

"This is going to be up to the Egyptian people. But let's look at what we have. We have a calendar that already has elections for the next president scheduled, so there is an action-enforcing event that is already on the calendar." -- Secretary of State Hillary Clinton, CNN's "State of the Union"

"I think it is loud and clear from everybody in Egypt that Mubarak has to leave today, and it is nonnegotiable for every Egyptian. People have been saying or demonstrating for him to leave. Today, the demonstrations say that he should be put to trial. If he wants to save his skin, if he has an iota of patriotism, I would advise him to leave today and save the country." -- Egyptian opposition leader Mohamed ElBaradei, CNN's "Fareed Zakaria GPS"

"I firmly believe it. I think if you listen to the street, they are not asking for democracy, they are not asking for anything except the removal of Mubarak. He's become a symbol for everything that they find objectionable. It doesn't mean it can't be a transition as orderly and I certainly hope it is. But he is a symbol now and you've got to change the symbol." -- Edward Walker, former U.S. ambassador to Egypt, "State of the Union"

"So I think what we need to do now is to lay out a plan for Mubarak to lift the state of emergency, announce that elections -- free and fair -- will be held in September, which were already planned, allow an open and free democratic process, which I think we could have some confidence if it was an open process that you would see a free and fair election and that we make sure that the aspirations of the Egyptian people are realized finally." -- Republican Sen. John McCain, "State of the Union"

"Not every country can become a democracy at the snap of a finger, but Egypt might well be ready for it. And that would be the best outcome, as I say, of a lot of bad choices. Mubarak cannot continue in the long term with the oppressive regime he's had now. The demonstrators have shown that." -- Democratic Sen. Charles Schumer, "State of the Union"

"People in Egypt have shown during this time a great deal of solidarity, a great deal of desire to see their country develop and prosper. And I believe that every loyal Egyptian will continue to undertake his responsibilities and contribute towards the improvement of his homeland." -- Sameh Shoukry, Egyptian ambassador to the U.S., ABC's "This Week"

Which side in Egypt does U.S. support?

"What could be realistic is that Mubarak himself becomes convinced, with outside advice, that it is in his interest, as well as in Egypt's interests, that he goes, and that he sets in motion a process which facilitates that. I think the alternatives otherwise are much tougher." -- Zbigniew Brzezinski, national security adviser under President Carter, "This Week"

"I'm not speculating about who goes or who stays. And I'm not prepared to comment on what kind of democratic process the Egyptian people can construct for themselves. But we obviously want to see people who are truly committed to democracy, not to imposing any ideology on Egyptians, and therefore we would like to encourage that people who have been the voice of protests and been the voice of civil society be the ones at the table trying to design what would be an orderly transition to meet the democratic and economic needs of the people." -- Clinton, CBS's "Face the Nation"

"It's not up to us to give the Egyptians advice about this. You know, hopefully this transition will occur relatively peacefully. And at the end of it all, I hope we still have an important ally in the Middle East." -- Senate Minority Leader Mitch McConnell, NBC's "Meet the Press"

On where the U.S. stands:

"We are on the side -- as we have been for more than 30 years -- of a democratic Egypt that provides both political and economic rights to its people, that respects the universal human rights of all Egyptians. And that is the message that every ambassador, whether Republican or Democratic president, everyone has conveyed for over 30 years." -- Clinton, "State of the Union"

"What's important to us is Egypt, it's not Mubarak. And Mubarak is not Egypt." -- Walker, "State of the Union"

"I think that President Mubarak, he knows what's going on in his own country. It's up to the United States to be a helpful, assisting but insisting partner. And by the way, we cannot afford a Tiananmen Square in Cairo. " -- McCain, "State of the Union"

"We have sent a very clear message that we want to see restraint, we do not want to see violence by any security forces, and we continue to convey that message. There is no discussion as of this time about cutting off any aid. We always are looking and reviewing our aid." -- Clinton, "This Week"

On whether Americans in Egypt should leave:

"We are following the conditions for American citizens extremely closely. This is one of my highest responsibilities. And we have authorized voluntary departure, which means that we will assist American citizens to leave Egypt. We have warned that there should not be any nonessential travel to Egypt." -- Clinton, "Fox News Sunday"

On addressing the debt ceiling:

"We can come to a reasonable agreement that curbs spending. ... But to just stay in your corner and say, 'It's my way or I'm shutting down the government,' that could lead to terrible, terrible problems. And I would plead with my new Republican colleagues in the House who seem to want to do this, that that is playing with fire. Please don't do it." -- Schumer, "State of the Union"

"The president of the United States is asking us to increase the debt limit. But on Tuesday night, he didn't even address it. And I don't think the American people will tolerate increasing the debt limit without serious reductions in spending and changes to the budget process, so that we can make sure that this never happens again. The other night, all he did was call for more stimulus spending. I think our team has been listening to the American people. They want to us reduce spending, and there is no limit to the amount of spending we're willing to cut." -- House Majority Leader John Boehner, "Fox News Sunday"

"We have two opportunities to do something important for the country on spending and debt. We ought not to miss this opportunity. The president ought to step up to the plate with us and tackle it together." -- McConnell, "Meet the Press"

On changing the health care legislation:

"The president has said he's open to changes to this. He is not open to refighting the entire fight of health care. People have suggestions on how to make it better. But he's not in favor of refighting this fight." -- White House chief of staff Bill Daley, "Face the Nation"

On why he cries so much:

On why he smokes:

"Oh, why do we bring this up again? You know, smoking. It's a bad habit but I have it. And it's a legal product. I choose to smoke. Leave me alone." -- Boehner, "Fox News Sunday"