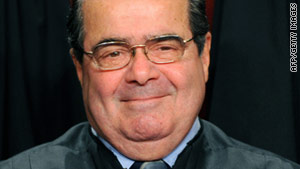 Washington (CNN) -- Recent remarks from a Supreme Court justice have alarmed those still pushing for an Equal Rights Amendment to the U.S. Constitution, three decades after an earlier attempt failed.

Congressional supporters of such an amendment say there's now some urgency to include the concept of equality in the document after Justice Antonin Scalia was quoted as saying "nobody ever voted for that."

A 1972 proposal fell short of ratification by three states before its 1982 deadline. Scalia, in last month's issue of California Lawyer magazine, said that if "society wants to outlaw discrimination by sex, hey, we have things called legislatures."

Lawmakers responded Thursday on the East Front of the U.S. Capitol, across from the Supreme Court.

"Today, while the House is reading the Constitution, we are here to point out what is so troubling about what Justice Scalia believes," said Rep. Carolyn Maloney, D-New York. If Scalia's view spreads to a high court majority, Maloney said, it "could overturn all of our body of work to protect the rights of women."

The key Senate supporter, New Jersey Democrat Robert Menendez, said three-fourths of Americans assume the Equal Rights Amendment is already part of the Constitution -- but because the measure has never been ratified by the states, "the courts might not guarantee it," he said.

Menendez underscored the need to take action, based on the Supreme Court's ruling in last year's Citizens United case against business. He said the justices "would elevate a corporate entity to have the rights of an individual, and yet say that women do not have rights as an individual under the Constitution. That is incredibly alarming."

Scalia's remarks date to September, during an interview with a California law professor. He is quoted as saying, "Certainly the Constitution does not require discrimination on the basis of sex. The only issue is whether it prohibits it. It doesn't."

Maloney said many women's groups have acted as if prevailing law and practices are enough to assume women have equal rights, but she noted that several prominent groups now have fresh concern.

"We have waited far too long," said Eleanor Smeal of the Feminist Majority. "We've got to make sure it's explicit in the Constitution."

Terry O'Neill, president of the National Organization for Women, held up a pocket copy of the Constitution and read part of the 14th Amendment, saying "nor shall any state deprive any person of equal rights under the law."

"A man in power like Antonin Scalia insists that the word person in the 14th Amendment doesn't apply to half the population of the United States," she said.

Lawmakers who passed the 1972 proposal extended a seven-year deadline to 1982, yet ratification stalled at 35 out of the needed 38 states. Supporters believe the 35 ratifications could be kept alive by Congress if and when another three states endorse that 1972 proposal.

"The three-state strategy was developed following ratification of the Constitution's 27th Amendment in 1992, more than 203 years after its passage by Congress in 1789," notes the website www.equalrightsamendment.org.

The 27th Amendment blocks lawmakers from voting themselves a pay raise to take effect during the same session of Congress in which it was passed.