By Kelly McBride, Special to CNN 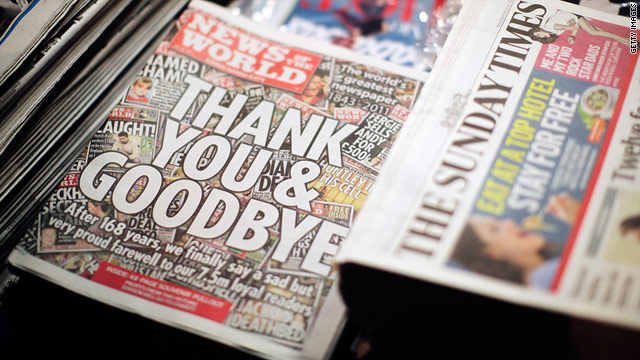 The News of the World, owned by Rupert Murdoch and Britain's largest-circulation paper, issues its last edition after 168 years.
STORY HIGHLIGHTS

Editor's note: Kelly McBride is a senior faculty member for ethics, reporting and writing at the Poynter Institute for Media Studies, a nonprofit school that serves professional journalists and media leaders.

St. Petersburg, Florida (CNN) -- Finally, a media scandal of true systemic corruption. That's what we get with the allegations that News of the World and other properties in the Rupert Murdoch domain have hacked into phones, bribed the cops and snooped around private medical records.

I hope media-haters in the United States take notice. Because this is a real scandal. I've worked in media ethics for a decade now, teaching professional journalists how to make stronger decisions, coaching professional newsrooms to create clear policies, and cleaning up after the occasional public embarrassment.

I was beginning to think I was crazy. Because radio and television pundits routinely dismiss American journalism as corrupt, I wondered if I was missing something. But watching this spectacle unfold abroad, I can decisively say that we, American journalists, are not like that.

Our scandals involve one rotten apple, a Jayson Blair or a Jack Kelley, in isolated acts of plagiarism or fabrication, but not dozens of reporters engaged in criminal behavior. Our management failures involve desperate measures to find new revenue, like a Staples Center (where the Los Angeles Times inappropriately shared revenue for a special section) or the proposed salons at The Washington Post (where the marketing department proposed creating events that give those willing to pay top dollar access to top reporters). But they don't involve the willful creation of a culture that disregards honesty in pursuit of a scoop.

To be fair, there are plenty of upstanding journalists and reputable newsrooms in Britain. In fact, London is home to some of the world's best news shops, including the BBC and The Guardian. But recent revelations suggest the range of journalistic practice is quite wide.

Meanwhile back in the States, radio hosts, television pundits and politicians love to bash journalists, suggesting that secret liberal bias drives news decisions, as if editors sit around in back rooms scheming to undermine conservatives by plotting to make President Barack Obama look good and do more stories about gay people.

I hear from reporters who are deeply concerned about the ethical shortcomings in American newsrooms. They fret that their bosses are chasing a demographic that is attractive to advertisers and ignoring important civic issues. They stay up at night wondering how many more corners they can cut and still get the story accurate. The fear their credibility will be damaged by publishers or owners who try to wield their political clout.

But no reporter has ever called, concerned about rampant lawbreaking in her shop. If anything, it's the editors who seek advice, like the one who called just recently after a reporter proposed a first-person story on purchasing illegal fireworks. I got a similar call last year when a reporter wanted to illegally purchase guns to demonstrate how easy it is to skirt the law.

(American) editors routinely ask: 'What if the audience knew you did this?'
--Kelly McBride

Murdoch pulls out of 'game' for now
RELATED TOPICS

American newsrooms spend a lot of energy looking for pathways that produce both substantial information and juicy stories, but that keep those pathways transparent. Editors routinely ask: "What if the audience knew you did this?" In fact, a growing trend is to make it clear to the audience how and where information originates, even when a source remains anonymous.

My point is, ethical failures in American journalism are singular acts, anomalies that stand out because they take place within a culture where the value of truth is well-accepted and understood.

Why is that? There are hardly any U.S. government regulations that govern the behavior of journalists. The First Amendment makes such things unconstitutional. In England, there are government councils and licenses. There are laws that dictate what kind of information can be printed and when. Perhaps it's true that when individuals and organizations are expected to self-regulate, they are harder on themselves than when restraints are imposed from the outside. It's a fact of human nature well understood by elementary school teachers.

But there is a stronger sense of professionalism among journalists in the United States. Clive Crook is a British journalist now stationed in the States, working as the Washington commentator for the Financial Times and as a senior editor for Atlantic Monthly magazine.

"One of the things that struck me most forcefully, coming to work in the U.S. from Britain, was that American journalists and the American press take themselves very seriously, " Crook said on NPR's "Diane Rehm Show."

"And I remember, to begin with, finding this, to be honest, a little off-putting. ...The American press regards itself as a kind of priesthood. ... It takes itself too seriously," he said. "I was raised more in that British tradition. But, of course, now we're seeing the downside of that British acceptance of dubious ... practices and the advantages of a press that takes itself seriously are now very plain."

It's true. For the most part, American journalists take their work quite seriously. Nonjournalists often scoff at that sincerity. But it doesn't seem to be waning, even as the profession dramatically shrinks with the economy. When you believe in the purpose of your work, and you stand alongside colleagues who believe in that same purpose, the work itself tends to embody those values. That is how you fight a culture of corruption.

The opinions expressed in this commentary are solely those of Kelly McBride.