Sculptures that engage your heart -- and expand your mind 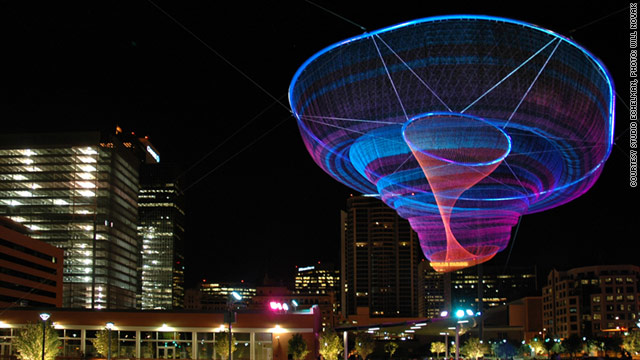 Editor's note: TED is a nonprofit organization dedicated to "Ideas worth spreading," which it distributes on its website.

(CNN) -- Janet Echelman never studied sculpture or architecture, and she was rejected by each of the seven arts schools she applied to after college. Yet in an unlikely turn of events, she has become a pioneering creator of enormous flexible sculptures that are beginning to enliven the world's cities.

Inspired by fishermen using nets in India and lace makers in Lithuania, Echelman has created what she calls "permanent, billowing, voluptuous" sculptures made up of flexible fibers that ripple in the wind.

"I want to create these oases of sculpture in spaces of cities around the world," she said in a talk at the TED2011 conference in March in Long Beach, California.

She elaborated on her art in an interview with CNN:

CNN: What led you to become an artist?

Janet Echelman: My first semester at college, I took a drawing class where we had to report on the life's work of different artists. I picked the painter Henri Matisse, who in old age became bedridden and then invented a whole new way of image-making (the cut-paper murals). I wanted to have a life like his, where I'd be learning at every stage without fragmentation between my inner life and my working life.

CNN: How did you come to start creating outdoor sculpture?

Echelman: After painting for 10 years, I was invited to India as a Fulbright lecturer in painting, with a commitment to create a large painting exhibition for the U.S. Embassy -- but my special paints to make the artwork never arrived. So I decided to embrace what was there.

Every evening after work in the studio, I would walk on the beach and swim, just as the fishermen were bringing in their nets. It was then when it occurred to me that nets could be an alternative way of creating sculptures without heavy, solid materials. With the help of local tailors and fishermen, I created my first big net sculpture, which I hoisted up in the air. I saw how the net billowed softly and made the unseen dance of wind suddenly visible. This experience was the beginning of my exploration into knotting fiber as a way to sculpt urban space.

CNN: Could you give an example of one sculpture and what it communicates?

Echelman: I believe people can have a profound experience by being surrounded by something beautiful -- that's what I aim for. My sculpture is about the way you feel when you're standing under it and inside it. It's experiential art. That's why I love the large outdoor format because you can feel yourself being pulled into a billowing soft, porous form. The sculptures make me feel protected and at the same time connected to limitless sky.

TED.com: Building a park in the sky

On a secondary level, I use layers of cultural and environmental history to give people a way in. In Portugal, my sculpture "She Changes" refers to the town's fishing history, to the era of seafaring trade and discovery. The contemporary site is industrial, surrounded by red and white striped smokestacks, which is mirrored in the pattern of the sculpture. The nets themselves reveal the ever-changing wind, which provides a contemplative experience.

CNN: How do you engineer the sculptures to survive exposure to harsh weather?

Echelman: After researching the location and drafting the design, I begin working alongside engineers and architects, who insert my diagrams and sketches into 3-D site models.

These models are then scaled so that we can analyze and alter the netting based on the environmental context.

For instance, for the "Water Sky Garden" which premiered at the 2010 Vancouver Winter Olympics, I collaborated with Buro Happold engineers to prepare for the worst -- like the kind of ice storm that occurs only once every 20 years. We calculated the size of the openings to allow snow to fall through, and if ice begins to stick and the weight rises to a specific level, the armature is designed to release the net, which can easily be re-attached after the storm. This allowed me to keep the artwork with the lightness I wanted, rather than overbuilding it for the rare occurrence.

Wind load is a primary concern. My outdoor nets are engineered to withstand hurricane force winds of 90 mph using computer software written specifically for us. Once we've ensured the integrity of the structure, we send out the final design to professional fabricators, who turn my idea into a physical reality.

The sculptures require us to use many types of high-tech fibers, some which are 15 times stronger than steel pound for pound. Some fibers I use are 100% UV-resistant and colorfast, and others have a UV coating.

CNN: In one of your works, you focused on data about the energy released by the Chile earthquake and tsunami. Why did you do that, and how is it represented in the work?

Echelman: The city of Denver and its 2010 Biennial of the Americas asked me to represent the 35 nations of the Western Hemisphere and their interconnectedness in a sculpture. The tragic earthquake had just occurred in Chile, and I read an article by a NASA scientist that measured the effects of the earthquake. I was fascinated that it shortened the length of the entire earth's day. Learning that a physical event in one part of the world could affect time for everyone on the planet became the catalyst for the artwork.

I contacted the National Oceanic and Atmospheric Administration and asked if they could share their data on the tsunami which followed the earthquake. Using NOAA's tsunami wave-height data, my studio created a three-dimensional model of the tsunami's amplitude rippling across the ocean. This inspired my sculptural form for the sculpture titled "1.26," which refers to the microseconds by which the earth's day was shortened.

CNN: What are you working on now?

Echelman: I am working on several new commissions right now -- works designed for a major new sports arena, a library, a public park, a large urban plaza in the center of one of America's historic cities. This last project, Philadelphia's Dilworth Plaza in front of its historic City Hall, is exciting for me as it reshapes urban experience and uses a new material for me -- water.

Opening in 2013, the artwork will trace above ground the pathways of the three subway lines that run beneath the plaza, functioning as a continuous X-ray of the city's circulatory system. The movement will occur in real time, using a data feed of train arrival and departure, drawn in a new material -- 5-foot-tall "dry-mist" curtains composed of atomized water particles, illuminated by layered colored light.

This month I began a Guggenheim Fellowship, which is enabling me to spend some time collaborating with scientists at MIT, Harvard, and Tufts. It's been mind-blowing, and is helping me push the boundaries on my work. I'm excited with the possibilities for new pieces that will come from this.

CNN: Where do you see this form of sculpture heading?

Echelman: My whole career I've been interested by the distinction between an emotional and an intellectual response to an artwork. For me, it's always been important to engage the pre-verbal. Now, as I study some neuroscience, I'm learning that this distinction is mirrored in the structure of the brain, and that my sculpture engages the inner part of the brain responsible for all of our feelings, and this part of the brain has no capacity for language.

The newest parts of my work are the analytical aspects -- the historical and cultural references, the visualizations of scientific data. These all engage the outer part of the brain, the neocortex.

I see this aspect of my art as giving people a handle to pull them into the contemplative, emotional, physical experience of moving underneath the sculpture. The most powerful part of the art is experiential, yet it's the hardest to describe because it's nonverbal. I don't want to have to choose between emotional and intellectual response to my art -- I'm now seeking to engage both.

Echelman: It occurs to me that I've never asked myself that question! I like to respond to specific sites and circumstances. Urban centers are great places to work because there's so much to respond to and so many people to engage with. For example, some recent conversations about potential sculpture projects were with New York City's High Line Park, the American ambassador to France about an installation on the Louvre's glass pyramid, and with the architect in charge of the Colosseum in Rome.

I love working on projects where the intervention is on several levels -- art, architecture, landscape, public space.