A 'people's budget' that invests in jobs 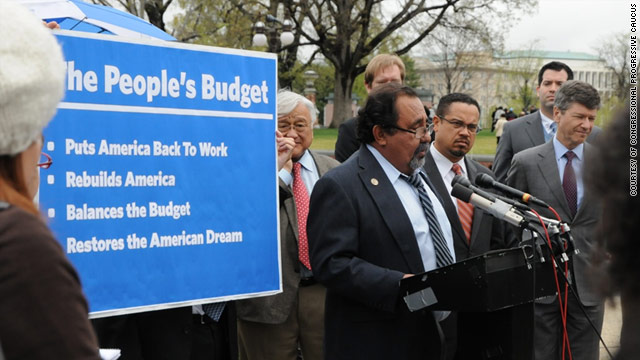 Rep. Raul Grijalva, at the microphone, is joined by Rep. Mike Honda, on the left behind him, and Rep. Keith Ellison, to the right.
STORY HIGHLIGHTS

(CNN) -- Despite a weak economic recovery and persistent, unacceptably high unemployment, Washington is prematurely pivoting from job creation to deficit reduction. Worse yet, many of the budget proposals flooding Washington are nothing but reverse Robin Hood plans to redistribute wealth from working families to the most privileged among us.

Last week, House Budget Committee Chairman Paul Ryan, R-Wisconsin, unveiled a reckless budget that includes a plan to privatize Medicare by forcing recipients to buy insurance on an open market, where premiums have more than doubled over the last 10 years, to gut Medicaid by shifting costs to states and reducing funding, to cut taxes on corporations and wealthy individuals and to reduce the nation's ability to make needed investments by capping overall levels of federal spending.

This plan would undermine economic growth and job creation for years and exacerbate ever-widening income inequality. Instead of these reckless cuts, job creation and strengthening the economic recovery must be our priority.

It is our obligation to the American people to address our long-term fiscal challenges without sinking the economy back into recession, further undermining the struggling middle class, or stripping investments that pave the way for long-term growth and American competitiveness in the global economy.

Obama: We must all work together
RELATED TOPICS

Members of the Congressional Progressive Caucus, supported by technical assistance and analysis from the Economic Policy Institute, have proposed a progressive budget that paves the way for robust job creation as an alternative to Ryan's austerity-focused plan.

Ryan's budget places the burden of deficit reduction on the backs of working-class Americans while financing tax cuts for the wealthy and favors to powerful special interests.

The "People's Budget" would create jobs and invest in long-term growth, investing $1.7 trillion in job creation, infrastructure, education and scientific research and development over a decade. The most effective path for deficit reduction is to dramatically reduce unemployment and get Americans working in good jobs, earning more and paying taxes.

This budget does that. The People's Budget also strengthens Social Security by raising the taxable maximum to include 90% of economy-wide earnings and eliminating employer-paid caps on their high-income employees.

Together these policies would maintain the solvency of Social Security, without any reduction in benefits, at least 30 years beyond current projections. It also secures access to affordable health care by adding a competitive public option and negotiating drug prices with big pharmaceutical companies resulting savings of nearly $250 billion over a decade.

The budget would responsibly end the wars in Iraq and Afghanistan and impose sensible budget constraints on the Defense Department. The budget makes targeted public investments, but cuts overall spending by $1.7 trillion over a decade.

It requires corporations to pay their fair share by eliminating taxpayer subsidies to oil and gas companies and closing international tax loopholes that deprive the United States of jobs, investment and revenue. It taxes exotic and risky Wall Street financial instruments to curb speculation and recovers the costs of the financial crisis.

The budget restores fairness to the tax code by asking more from those who can afford to pay more. Instead of cutting taxes for the wealthiest Americans, the budget raises taxes on those who have seen most of the income gains over the last decade by adding new tax rates for millionaires and billionaires. The budget taxes investment income as wage income, ending an unfair tax system that taxes income from wealth at lower rates than the wages of teachers and nurses.

The People's Budget offers a credible way to balance the budget within a decade without engaging in any budgetary gimmicks.

Fiscal responsibility does not require gutting social programs and public investments that promote economic security and generate growth. Instead, it requires standing up to the powerful lobbies whose special interests are not in our national interest and abandoning unfair tax policies that favor the wealthy and privileged.

These policies more than achieve long-term sustainability by slowing health care, bringing the budget to surplus within a decade, and bringing debt down below a sustainable 65% of the economy. A budget is more than a mathematical exercise; it is the most definitive embodiment of our national values.

We believe the People's Budget reflects the values of the population at large rather than the interests of lobbyists. The budget deficit is not an excuse to wage ideological war against government and the social programs that have delivered economic security, health and progress for the better part of a century. We have an obligation to rebuild a stronger America with opportunity and economic security for all.