Drinking at work: It's not all bad

By Robert Sutton, Special to CNN 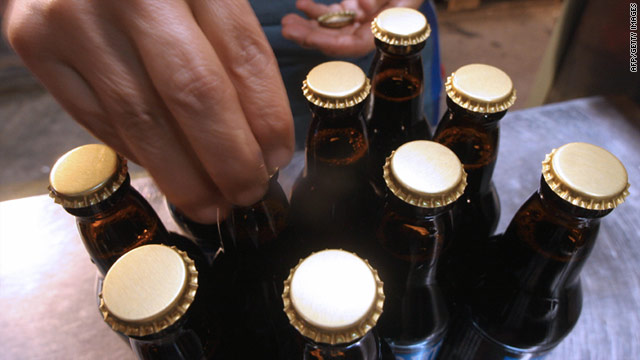 Editor's Note: Robert Sutton is a professor of management science and engineering at Stanford University and author of "Good Boss, Bad Boss." His personal blog is Work Matters.

(CNN) -- At about 5:30 on a Friday afternoon a few weeks ago, I was running out the door to get home when I ran into several colleagues sitting in a circle and drinking some Scotch. They invited me to celebrate the end of the week with them, and after hesitating a bit, I joined the little group. Yes, I enjoyed the single malt they gave me, but I enjoyed the conversation much more. These are people I see all the time, but nearly all of our interactions are rushed and task-oriented.

We talked about an array of topics -- a sick friend, kids, a cool wireless speaker the IT guy had set up and our preferences for different brands of Scotch. Then we went our separate ways. I was struck by how much the brief interaction affected me. I felt closer to my colleagues, more relaxed from the great conversation and the Scotch, and I felt good about working at a place that allows employees to take a prudent drink now and then.

That little episode illustrates the role that alcohol plays at its best. In addition to its objective physiological effects, anthropologists have long noted that its presence serves as a signal in many societies that a "time-out" has begun, that people are released, at least to a degree, from their usual responsibilities and roles. Its mere presence in our cups signals we have permission to be our "authentic selves" and we are allowed -- at least to a degree -- to reveal personal information about ourselves and gossip about others -- because, after all, the booze loosened our tongues. When used in moderate doses and with proper precautions, participating in a collective round of drinking or two has a professional upside that ought to be acknowledged.

This is an old tradition in Europe, and drinking has always been part of the culture of high-tech firms in Silicon Valley (where I live), going back to Hewlett-Packard's renowned Friday afternoon beer bashes in the 1950s to Genentech's weekly "ho-ho," which continue to this day. Now, this old trend appears to roaring into Silicon Valley at even higher levels than in the past, with drinking woven into everyday work life in some companies. I am hearing reports of free booze and beer on tap at lots of start-ups. Bloomberg names Twitter, Yelp, CrowdFlower and Tello, and I've heard of numerous others.

One driving force often mentioned is the (sometimes) glamorous drinking seen on the hit TV show "Mad Men." There are other reasons that drinking may be on the rise in Silicon Valley firms. While the rest of the nation struggles with high unemployment, there is a vicious war for talent here. We are in the midst of a boom fueled by the success of big local companies, including Apple, Facebook and Google, in concert with a huge infusion of venture capital money that is spawning hundreds of new local firms.

The enormously talented engineers and designers these companies desperately need are mostly young folks who are in their partying prime. A related hallmark of start-ups is the absurdly long hours that people work at them. Having a bit of booze around may dull their senses a bit, but it keeps them working those long hours. While much of the film "The Social Network" is fictionalized, the ability of great programmers and designers to produce fantastic software and websites in drunken states is not.

Plus, as I have emphasized, sharing drinks is part of the formula that companies have used in this region (and elsewhere) to create social bonds that help spark and sustain great organizational cultures. Participating in that culture can give you a useful social lubricant, creating new connections with your co-workers and even setting the stage for deeper intellectual conversation.

I don't know of any Silicon Valley companies where alcohol consumption has reached destructive levels, but I do think it is important to keep in mind that there is always a danger that once innocent and controlled drinking can quickly spin out of control. Excessive partying and drinking can undermine productivity, fuel crudeness and sexual harassment and destroy employee mental and physical health.

Bosses need to be aware of and protect people who abstain -- be it for religious reasons, because they've had control problems in the past or because they simply don't like the way the stuff tastes. I've been at parties where Muslims and Mormons felt extremely uncomfortable because people (including bosses) kept pressuring them to drink. Although it isn't always easy, some abstainers become quite adept at dealing with their co-workers' boozing. One Mormon I know used to avoid any social situation where people drank. But now he joins in when it's necessary for business reasons and often talks and jokes about his abstinence -- and he volunteers to be the designated driver now and then as well.

The opinions expressed in this commentary are solely those of Robert Sutton.