The Triangle fire: A blaze that woke a nation 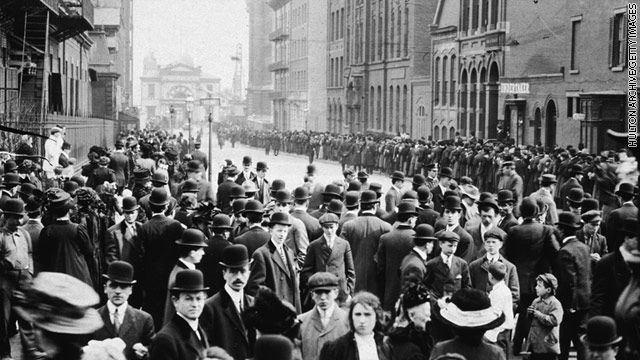 (CNN) -- "Three stories of a ten-floor building at the corner of Greene Street and Washington Place were burned yesterday, and while the fire was going on 141 young men and women -- at least 125 of them mere girls -- were burned to death or killed by jumping to the pavement below." -- The New York Times, March 26, 1911

Friday marks the 100th anniversary of the Triangle Waist Co. fire, a blaze at a sweatshop in New York that shocked the nation and became a defining moment in the history of the American work force. Its death toll would reach 146 -- mostly young Italian and Jewish immigrants struggling to earn a living making blouses in a garment factory in Manhattan's Greenwich Village.

David Von Drehle, author of "Triangle: The Fire That Changed America," an award-winning history widely considered the definitive text on the event, spoke to CNN about the fire's profound impact and how its place in U.S. history grows by the year.

CNN: Why did so many people die in the Triangle fire, and what was the cause of death for most of them?

David Von Drehle: The fire broke out on the eighth floor of a 10-story building. It quickly started spreading up. The factory worked with thin cotton fabric, and of course, tissue paper to separate the fabric. These are both highly flammable. There were tons of scraps in the factory, and the contents went up very quickly.

On the ninth floor, they had no warning the fire was happening. By the time they discovered it, it had already spread into one of the stairways, making it almost impassable.

The fire escape became overcrowded and collapsed. Twenty-five of the fatalities were people who fell from the fire escape and died at the bottom of the air shaft.

There was this locked door at the Washington Place exit that they couldn't get open. This left only the passenger elevators, and the operators of those elevators were very heroic. They kept going past the flames on the eighth floor several times to rescue as many workers as they could.

CNN: In the criminal case that followed the Triangle fire, the defendants -- two owners of the shirtwaist company -- were acquitted. How does the verdict look to you 100 years later?

Von Drehle: The fact that the owners of the factory got off scot-free and, in fact, by the time all the insurance settlements were paid, made a profit on the fire because they were overinsured is really a scandalous fact of history.

On the other hand, given the way the laws were written and a conflict of interest that I discovered on the part of the judge in the case, the verdict is not really a surprise to me.

CNN: Where does "greed" fit into the story of the Triangle fire?

Von Drehle: Isaac Harris and Max Blanck were in the building at the time of the fire. They narrowly escaped with their own lives. They did lose relatives in the fire. Most of their families worked in the factory. Some of them died. Obviously they were motivated by greed in ways.

One of the most heartbreaking moments of the trial is when Isaac Harris is asked, "Why did you feel like you had to search the workers at the end of every work day? How bad was the theft problem in your factory? How much have you ever lost in a year? 'And he sort of says well, "12, 15, maybe 25 dollars." It's chilling.

CNN: How do you compare the American discussion about immigrants just before the Triangle fire to the mood now? Are there any parallels?

Von Drehle: There's always been a tension in the United States between our tradition of relatively open immigration and a feeling that we're being overtaken, swamped, buried in a tide of foreigners. You would have heard some of it in 1911, but in reality, the period from about 1850-1920 was a period of just astonishing immigration and particularly in this era at the turn of the century. Obviously now we're in a kind of backlash against immigration. I think it's a kind of perpetual pendulum swinging in American history.

CNN: Do any modern-day Triangle fires come to mind? Are there equivalents in our time?

Von Drehle: In a sense, the World Trade Center attack on 9/11 is a kind of the Triangle fire times one hundred because it involved some of the same drama, obviously greatly multiplied, and not accidental like the Triangle fire. But it did have the element of large numbers of people witnessing it as it happened and the helpless feeling of seeing people trapped at the top of a tall building, having to decide whether they're going to die in the flames or leap to their deaths.

That trauma that we lived through gives us, I think, a new kind of understanding of the kind of traumatic effect the Triangle fire had on an earlier generation, before the age of video and film. But there were thousands of eyewitnesses who saw this fire happening because it happened in a crowded part of the city, just off Washington Square on a beautiful spring afternoon.

CNN: Are there still sweatshops today that are firetraps like Triangle?

Von Drehle: Undoubtedly, yes. Important difference, though: In 1911 such places were completely legal and very poorly inspected. Today, a similarly unsafe workplace is illegal. There will always be people willing to cut corners and break the law. We'll never reach a state of perfection. It's important to remember there have been substantial changes and American work places are dramatically safer than they were 100 years ago.

As the low-wage industries have globalized and factories have moved into developing countries, we see with frequency events very much like the Triangle fire happening in places like Thailand and Bangladesh and India and China, explosions and fires in garment factories, in fireworks factories, in toy factories where hundreds of people are killed.

CNN: If the Triangle fire had not resulted in major reforms and legislation, how might America be worse off today?

Von Drehle: I imagine that some of these changes would have come anyway. But how many more factories would have had to burn is the question.

CNN: What led you, a journalist from Colorado, to go so deeply and with such empathy into a 1911 event?

Von Drehle: It really started when I moved to New York as a correspondent for the Miami Herald. I had an apartment in Greenwich Village and, as I was walking around the neighborhood, I saw an historical marker on a building and went over and read it. I knew very little about the Triangle fire.

I pictured it in a rickety tenement downtown. I was astonished to find that this building had survived intact, that it was right there on Washington Square and it's now a classroom and laboratory for New York University. I would look up at those windows and wonder what had had happened there.

CNN: Was there any survivors' guilt?

Von Drehle: Certainly the survivors were completely traumatized. In some cases they would narrowly escape and get out of the building just in time to see their best friend plunge to her death on the sidewalk or come out and see a friend or loved one, a sister or brother dead on the sidewalk. It was extremely traumatic and visceral, very panic-stricken. You can imagine the desperation that seized people inside the factory as they struggled to survive.

CNN: What sort of movie about the fire might be made? Why has nobody done it yet?

Von Drehle: Hollywood has just not been able to figure out how to do this. I think it'll happen. I was surprised that it didn't after Titanic because it has so many of the same elements.