Why Washington was blindsided by Egypt's cry for freedom

By Cynthia P. Schneider and Nadia Oweidat, Special to CNN 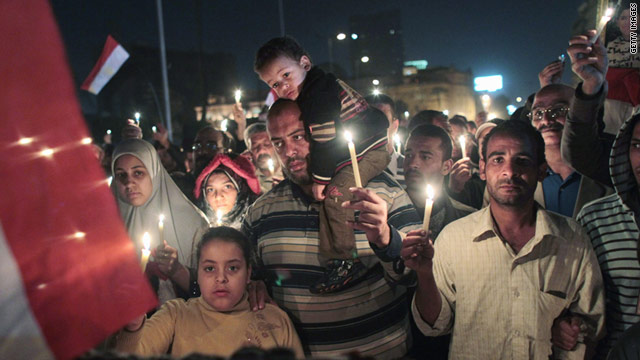 Anti-government protesters walk in Tahrir Square during a candlelight vigil for those killed during the uprising.
STORY HIGHLIGHTS

Editor's note: Cynthia P. Schneider, a former U.S. ambassador to the Netherlands, is a distinguished professor at Georgetown University, a senior non-resident fellow at the Brookings Institution, and co-director of the MOST Resource Center, which provides information about Muslims to the American film and television industry. Nadia Oweidat is a Ph.D student at Oxford University and a former research associate at the RAND Corp.

(CNN) -- The only surprise about the Egyptian revolution is that it took so long.

Demonstrations have been increasing in the past few years, despite the brutality of the regime, and with them deep distrust and hatred for President Hosni Mubarak and his government.

The Egyptian regime, as well as Washington, underestimated the impact of events such as the murder of the young businessman Khaled Sa'id, who was pulled out of a café in Alexandria in June 2010, beaten by the police, and then left dead on the street. If they had visited the Arabic Facebook page started by Wael Ghonim, "We Are All Kaled Sa'id," they might have realized that it was only a matter of when, and not if, the uprising would begin.

The profound discontent, frustration and humiliation of the Egyptian people also resonates in recent literature and films, such as "The Yacoubian Building" by Alaa al Aswany. Chronicling the corruption, unemployment and poverty that plagues Egyptian society, the film was a candidate for an Academy Award in 2008. For years blogs -- in English and in Arabic -- have decried the abuses of the government, and the hopelessness of life in Egypt for even well educated youth.

On a trip to Egypt last summer, we were shocked by the potency of hatred for the Egyptian president.
--Cynthia Schneider, Nadia Oweidat

On a trip to Egypt last summer, we were shocked by the potency of hatred for the Egyptian president. After cussing Mubarak throughout the ride, a taxi driver broke into tears saying that his children had not eaten any meat for months. That he was willing to run the risks inherent in openly criticizing the president shows how desperately he felt.

Now, thanks to the youth who incited the protests, "the jewel of the Middle East," has been unleashed after years of suppression under Mubarak. "We'd rather die with pride than live without it" proclaims a poster in Tahrir Square.

But through the prism of government and politics, Egypt looked stable -- if repressive. Internationally, it has continued for the past thirty years as a force for peace in the Middle East and a buffer for Israel. These priorities, and the misguided belief that supporting Mubarak's harsh regime represented America's security interests, appear to be guiding the U.S. response to the protests.

Will the United States end up on the right side of history?
--Cynthia Schneider, Nadia Oweidat

A tumultuous day in Egypt

Back to business in Cairo?
RELATED TOPICS

Blindsided by the onset of the revolution, Washington continues to underestimate the intelligence of the Egyptian people, their resolve to end tyranny, and their determination to accept nothing less than democracy.

To that end, the protesters have endured more than two weeks of regime brutality, hundreds of deaths at the hands of pro-Mubarak snipers and police (our sources in Egypt estimate at least 500 deaths, but the precise number cannot be determined because hospitals are forbidden to give out names of the wounded and dead), as well as severely limited food and medical supplies.

President Obama and Secretary of State Hillary Clinton have attempted to walk a tightrope of supporting the democratic aspirations of the protesters and criticizing the regime's violent tactics, while also calling for "stability" and a "gradual transition."

Their mixed messages, calling for Mubarak to "leave now" and then backing his close confidant and former head of Intelligence Omar Suleiman to lead the transition, reflect the challenging complexity of the situation, but also they have caused confusion and disappointment for those on the ground in Egypt and their supporters around the world.

American authorities further impair their credibility when they refer to the "negotiations" with Suleiman. These "talks with the opposition" have no legitimacy with the millions of protesters who are following the young leaders. Neither Mohammed El Baradei nor the youth leaders have participated.

Indeed, the leaders of the revolution have declared repeatedly that they will not negotiate until Mubarak leaves, and, even then, not with members of his regime. The Muslim Brotherhood, who did participate in the talks initially encouraged by the U.S., has been widely discredited among the protesters for speaking to Suleiman.

In between fielding calls from American officials, Suleiman and Prime Minister Ahmed Shafiq have been appearing on Egyptian State TV to discredit the protesters, insisting they represent "foreign interests" identified variously as American intelligence, Israel, and Hamas (an odd combination made even odder because Hamas has not permitted demonstrations against Mubarak, at least until recent days).

This tactic has backfired. The proud and nationalistic Egyptians have been incensed by this accusation from a regime that has increased its own riches while dragging the country into poverty. In his moving interview after having been released from prison, the emerging leader Wael Ghonim stated tearfully that what hurt him the most was being accused in prison of being paid by foreigners to protest. As a Google executive living in comfort in Dubai, Ghonim did not need money; but rather, he freely chose to travel to Egypt to participate in the demonstrations.

"How dare anyone doubt my love for Egypt?" he cried. An Arabic Facebook page entitled, "I delegate Wael to lead on my behalf" has already accumulated almost 300,000 "likes," and the number is increasing by the minute.

Will the United States end up on the right side of history? No one can deny that history is being made in Egypt, nor can anyone predict how this uprising of rich and poor, Muslim and Christian, will end. While many maintain that the United States must choose between its security interests -- stability in Egypt and the region and its ideals of freedom, democracy, and self-determination called for by the protesters -- we think this is a false dichotomy.

It is in the United States' long-term security interest to align itself firmly and unequivocally with the protesters. It is time to "walk the walk" of Obama's Cairo speech of June 2009: "All people yearn for certain things: the ability to speak your mind and have a say in how you are governed; confidence in the rule of law and the equal administration of justice; government that is transparent and doesn't steal from the people; the freedom to live as you choose. Those are not just American ideas, they are human rights, and that is why we will support them everywhere."

The cost of not redeeming the promise of Obama's stirring words will be every bit as high as the risk of uncertainty of the future of the people's revolution in Egypt.

The United States surely will not determine the outcome of the January 25 uprising. But if America is standing on the sidelines, anxious about upsetting other dictator allies, and not firmly backing the voices of freedom and self-determination, it will have lost its credibility, and its "soft power" to persuade and influence. There will be no more Cairo speeches; no one will listen.

No one is better equipped than the United States to assist the new Egypt in building democratic institutions, but will the protest leaders turn to the government that backed Omar Suleiman as the transition leader? It is time to change the script, and to act on behalf of the United States' true security interests by supporting human rights in Egypt, and the brave Egyptians fighting for them.