Revolt spreads against politics of despair

By Hamid Dabashi, Special to CNN 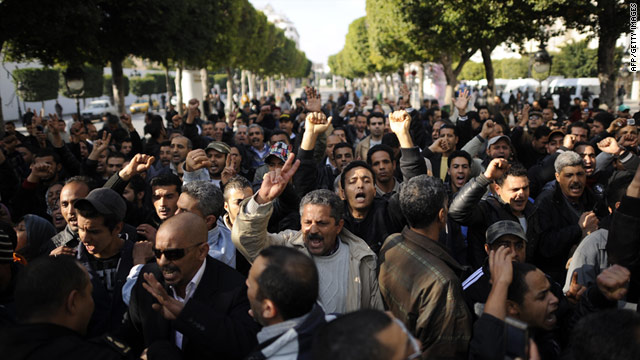 Editor's note: Hamid Dabashi is the author of "Iran: A People Interrupted" and the Hagop Kevorkian professor of Iranian Studies and Comparative Literature at Columbia University in New York. His most recent book is "Iran, the Green Movement and the U.S.: The Fox and the Paradox" (Zed Books, 2010).

New York (CNN) -- A revolt against the politics of despair is sweeping across the Arab and Muslim world -- signs of which are on full display from Afghanistan and Iran to Palestine and most spectacularly in Tunisia.

The protests against Zine El Abidine Ben Ali, the Tunisian dictator and a chief ally of the United States in the Arab world, had received relatively little notice in this country until they ended dramatically with his ignominious departure.

One can only imagine that if it had been Mahmoud Ahmadinejad or Ali Khamenei leaving the Islamic Republic with an overnight flight to a neighboring country, how jubilantly it would be greeted with banners in major U.S. media.

But in "the post-American world," as Fareed Zakaria has described the current condition of our globe, it no longer makes any difference if Americans pay much attention to seismic changes around them.

But those living in the immediate vicinity of Tunisia in the Arab and Muslim world have far more reason to follow closely every sign of revolt against tyranny.

Within seconds of the departure of Ben Ali from Tunis, Iranian bloggers and Facebook aficionados were making a pun on the name of the country ("Tunis" in colloquial Persian means "they could"). They wonder why the Tunisians could so swiftly topple the tyranny that rules over them while the Iranians could not.

Different countries have different levels of social momentum, even with similar circumstances.

While a series of mass demonstrations against Iran's fraudulent presidential election and for civil liberties has been brutally suppressed, the Green Movement is more widespread and rooted more deeply than ever in the Islamic Republic. Three grassroots movements -- labor, women and students -- continue their struggles despite violent suppression.

The ruling theocracy in the Islamic Republic might be able to outmaneuver a morally compromised and militarily overstretched United States, but it cannot stop the inspiration that Tunisian students, labor organizations and women's rights movement send to their Iranian counterparts.

And if the Islamic Republic thought all it had to deal with was more severe economic sanctions and computer worms to delay its nuclear projects, the Tunisian uprising should be a wake-up call that its real problem is with the democratic will of its own people who are now looking with awe and admiration at Tunisians.

That same hunger for change is arising in many countries out of the prevalent politics of despair that engulfs the region.

In a recent statement, an anonymous group of Palestinian students publicly expressed their frustration with Hamas' intolerant politics, Israel's destructive occupation of their homeland and the political games played by Fatah and the United Nations.

"Here in Gaza," the statement reads, "we are scared of being incarcerated, interrogated, hit, tortured, bombed, killed. We are afraid of living, because every single step we take has to be considered and well-thought, there are limitations everywhere, we cannot move as we want, say what we want, do what we want, sometimes we even can't think what we want because the occupation has occupied our brains and hearts so terrible that it hurts and it makes us want to shed endless tears of frustration and rage!"

Even in war-ravaged Afghanistan, people cannot be prevented from expressing their will to be free.

After a recent demonstration in front of the Iranian embassy in Afghanistan, the Islamic Republic demanded that the Afghan government arrest and punish those responsible for the rally. The demonstration was to condemn the Islamic Republic for not allowing oil tankers to cross the Iranian border en route to Afghanistan and also for the general ill treatment of Afghan refugees in Iran.

"Kabul is not Tehran," was the response from Afghan officials to their Iranian counterparts. "People can rally in protest against anything they wish."

Within minutes after that Afghan declaration, Iranian opposition websites and Facebook pages were echoing it with admiration.

Of these four countries, one is the principal nemesis of the United States and its regional allies (Iran), one used to be its ally (Tunisia) and the other two are torn by war or else under military occupation (Afghanistan and Palestine).

Compare this widespread rise in multiple nations for liberty with the recent fraudulent and corrupt election in Egypt, identical to many others from Morocco to Saudi Arabia. But the tide of liberty rising in these countries seems irreversible.

Arab leaders from Syria to Egypt to Yemen are already nervous about similar uprisings in their own countries, as many observers are wondering whether "the spring of Arab democracy" is finally upon us. But this axis of liberty is not broken along national, ethnic or even religious identities. The will of a young and fed-up population will bring down these regimes, whether the U.S. considers them friends or foes.

Economic malfunctions, massive social unrest, fundamental political failures and pervasive cultural alienation from the status quo are going to shake the very foundations of these societies and reshape the geopolitics of region.

The self-immolation of young Tunisian street vendor Mohamed Bouazizi, whose act of desperation in protest at the confiscation of his vendor cart set the cycle of demonstrations in motion that toppled Ben Ali, is now being emulated across North Africa. It's a clear sign of pervasive despair in the region.

A brutal theocracy may crack down on Iranians today, and U.S. foreign policies might disregard the human rights abuses of its corrupt allies on another day. But the tide of change has a logic of its own and will triumph.

President Barack Obama was quick in applauding the democratic change in Tunisia, but if I were he, I would not wait for the next Arab or Muslim dictator to run away from his own people in order to realize that siding with brutal potentates is not in the spirit of American ideals and aspirations.