Rights groups plead for clemency ahead of execution in Iran 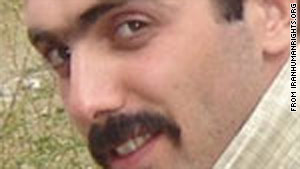 Habibollah Latifi, a Kurd, is set to be executed Sunday in Iran for security-related crimes.
STORY HIGHLIGHTS

(CNN) -- Human rights organizations appealed to Iranian authorities Saturday to call off the next day's scheduled execution of a Kurdish-Iranian law student charged with moharebeh -- which translates to "enmity against God" -- and other security-related crimes.

"We are urgently appealing to the Iranian authorities to show clemency, halt the imminent execution of Habibollah Latifi, and commute his death sentence," said Malcolm Smart, Amnesty International's director for the Middle East and North Africa.

Latifi is one of at least 16 Kurds facing execution on various national security-related charges, including moharebeh, according to published reports.

His lawyer has been notified by Iranian authorities that Latifi will be hanged on the morning of December 26 at the Sanandaj Prison.

Latifi, a law student at Azad University, was arrested in 2007 in the western Iranian province of Ilam for his alleged role in an attack on a police station in Kurdistan province and attempted assassination of a prosecutor on behalf of the anti-revolutionary group Kurdish Independent Life Party.

He was convicted and sentenced to death the next year by the Sanandaj Revolutionary Court.

Iran's penal code states anyone found taking up arms against the state, or belonging to an organization who violently attacks the the government, may be considered guilty of moharebeh and sentenced to death.

Joe Stork, deputy Middle East director at Human Rights Watch, said that Iranian intelligence agents tortured Latifi and a court sentenced him to death "without any convincing evidence against him."

"The circumstances surrounding Latifi's arrest, detention, and conviction strongly suggest that the Iranian authorities have violated his fundamental rights," said Stork. "The head of Iran's judiciary should immediately rescind the execution order."