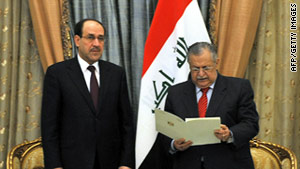 Talabani gave a speech and handed a letter to the prime minister, asking him to form a new government after a months-long political stalemate that drew fears of a resurgence in sectarian and insurgent violence.

Al-Maliki has 30 days to work with rival factions and form a government or face the prospect of losing the president's nomination.

"I know very well, as do you, that the task I have been designated with is not an easy one, especially with Iraq's current circumstances," al-Maliki said. "So I urge the great Iraqi people ... and my brothers the politicians to work on getting past all the disputes that had dominated the past stages."

Earlier this month, former Iraqi Prime Minister Ayad Allawi offered a grim prediction for the future of Iraq's government after a dramatic walkout staged by Sunni lawmakers in the Iraqiya bloc.

"We think the concept of power-sharing is dead now," the secular Shiite said. "It's finished."

The Iraqiya bloc, led by Allawi, had threatened to shun negotiations on sharing power with Kurds and Shiites.

But just days after the walkout, the principal political blocs agreed to establish a committee to negotiate aspects of the deal.

Haidar al-Mullah, an Iraqiya member of parliament, said the walk-out was a "misunderstanding." His bloc will take a "real part" in the government, he said, and will play the role of "positive opposition" by monitoring the performance of the government.

"There are still challenges to overcome, but all indications are that the government will be representative, inclusive and reflect the will of the Iraqi people who cast their ballots in the last election," Obama said at the G-20 summit in Seoul, South Korea this month.

Under the proposed deal, the three major governmental positions were to be filled by three members of the country's largest ethnic groups: the Shiites, the Kurds and the Sunnis.

The deal also intended to create a powerful new office -- expected to be headed by Allawi, al-Maliki's rival -- that would serve to check the new prime minister's influence.

But Allawi rejected the office, saying he would no longer take up the position.

"I personally have made up my mind. I will not be a part of this theater," Allawi said.