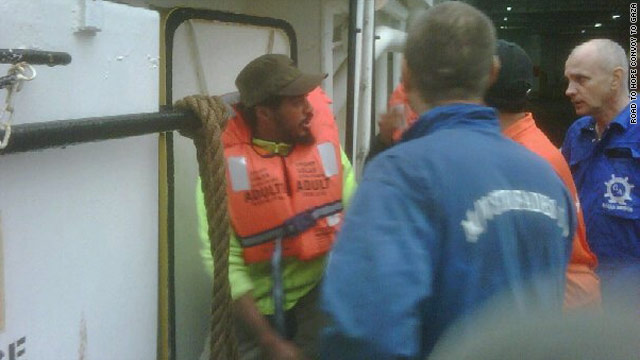 Activists working to break Israel's siege of Gaza aboard the Strofades IV after their ship was taken over in Libya, November 11.
STORY HIGHLIGHTS
RELATED TOPICS

Athens, Greece (CNN) -- Greek commandos boarded a Gaza-bound aid ship -- whose mission went awry and turned into a hostage situation after a dispute with the ship's captain -- in a harbor off the country's coast Friday, an official with the activist organization sponsoring the vessel said.

The people on board, who had been described as hostages by the charity group that sponsored the voyage, were safe and uninjured, but still awaiting word from Greek authorities on their legal status, said Ellie Merton, a representative of the Road to Hope organization in London, England.

Merton said the ship was taken over in Libya by its captain on Thursday after the ship captain "went nuts" and allegedly kidnapped the convoy members on board after an argument, according to the charity.

"Everyone was astounded. Nobody could have scripted this. It's just bizarre," said Merton, who said she had been in touch with members of the Gaza-bound convoy via text message and Facebook.

Ten convoy members -- seven Britons, two Irish citizens and an Algerian -- were taken hostage, the group said. As many as seven Libyans, including customs inspectors and border police, were also being held on the ship, according to Road to Hope.

Road to Hope's Facebook page stated that four Libyan naval vessels and two fighter jets had surrounded the ship, before it headed into international waters.

"The matter is a serious breach of every maritime law possible. We have asked all relevant embassies to supply urgent, immediate, consular assistance. We are extremely concerned for the safety of all the nationals on board," Road to Hope said in a statement Thursday.

Merton said Friday that other members of the convoy, left behind in Libya after the boat set sail, remained determined to reach Gaza before Eid, the upcoming Muslim holiday that commemorates the prophet Ibrahim's willingness to sacrifice his son for God.

"That's the urgency of the situation, because they want to get the aid into the besieged people," she said.

According to Road to Hope, if all had gone according to plan, the boat would have left Libya loaded with aid for Gaza. And 55 more volunteers would have been on board. The ship was originally destined for Egypt, with the intention of delivering goods via land into Gaza.

But after the captain's argument with an Egyptian broker, the ship left behind the aid group's cargo and a large group of volunteers.