Driver says he did not see American activist 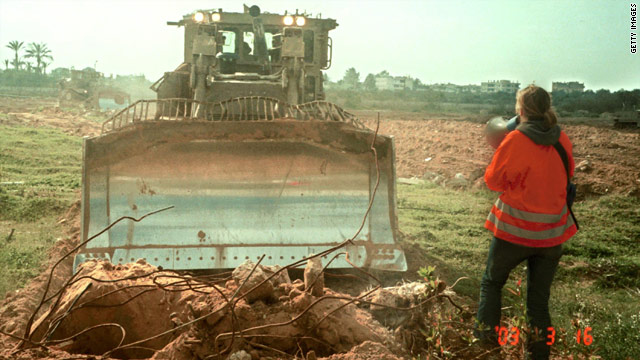 Jerusalem (CNN) -- From behind a wood and plastic partition, the Israeli soldier who drove a bulldozer that crushed an American peace activist to death testified publicly for the first time Thursday.

Rachel Corrie was killed seven years ago. But the driver's identity has never been revealed and he was not charged after a month-long Israeli investigation found that no Israeli soldier was to blame.

Her parents have searched for answers in their daughter's killing. Was it intentional? Who was accountable? On Thursday, they finally heard from the man who was responsible.

He acknowledged he was driving the bulldozer, according to Stacy Sullivan, spokeswoman for the Corrie family who was in the Haifa courtroom. He said he was aware there were protesters in the area -- he had been ordered to work carefully.

He said over and over again that he did not see Rachel Corrie before he struck her; that there was a pile of rubble impeding his vision.

He showed no remorse, Sullivan said.

The soldier, who was born in the Soviet Union and arrived in Israel in 1995, was testifying in a civil suit filed by Corrie's parents against the Israeli Ministry of Defense. Corrie's parents cannot take him to court because the Israeli Supreme Court has upheld a decision to shield him.

"We feel deeply disappointed that somehow the state of Israel feels that our being able to see the faces of these people and their body language, that some how that poses a threat to the soldiers," said Rachel's mother, Cindy Corrie.

In March 2003, Rachel Corrie was working with the Palestinian-led International Solidarity Movement. She was among protesters who were attempting to prevent the Israeli military from tearing down Palestinian homes when she was killed.

The Ministry of Defense said Thursday that it regrets Corrie's death. "But she was in a known combat area so the [Israeli Defense Forces] does not have responsibility," a spokesman told CNN. "The case is with the court and they will make their decision."

"The more we found out, the more likely that the killing was intentional, or at least incredibly reckless," he said.

"And, as a former soldier, I was even in charge of bulldozers in Vietnam ... You're responsible to know what's in front of that blade, and I believe that they did."

Craig Corrie said the soldiers, too, are victims. He does not view them with disdain.

"So I'm not full of hatred for this person, but it was a horrendous act to kill my daughter, and I hope he understands that."