Netanyahu and Abbas to meet next month, Israeli PM says 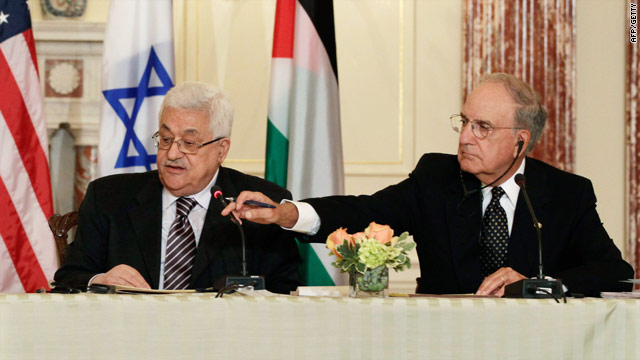 "I hope my good talks with Abu Mazen will continue -- this is essential," Netanyahu said, using a nickname for Abbas.

"I believe with my whole heart that it is in our power to reach a framework agreement within a year and change the history of the Middle East," he said.

Netanyahu is due to meet U.S. special envoy George Mitchell on Wednesday.

Mitchell headed to Israel Tuesday as the United States continues its full-court press for a resumption of peace talks between Israelis and Palestinians.

The end of Israel's 10-month moratorium on settlement construction -- and what happens next -- will be top items on the special Mideast envoy's agenda.

The United States is "disappointed," but remains "focused on our long-term objective and will be talking with the parties about the implications of the Israeli decision," U.S. State Department spokesman P.J. Crowley said Monday.

The Israeli moratorium on building new settlements in the West Bank expired Sunday -- a milestone met by cheers from supporters of construction and concern from diplomats involved in the initial rounds of face-to-face talks between Palestinians and Israelis.

Before his departure, Mitchell was in touch with both sides Monday, Crowley told reporters. Representatives from the White House are also going on the trip.

Mitchell is scheduled to meet Israeli Defense Minister Ehud Barak at his residence in Tel Aviv on Tuesday, the Defense Ministry confirmed.

"Of course I am worried -- the reason being that I see the peace process being stalled," he said. "It is a historic opportunity for the Palestinian people and the Israeli people. If we let slip this opportunity, I don't know if we will ever have a chance like this again."

"If the colonization stops, we will continue negotiations. If it doesn't, we will stop talks," Abbas told Europe 1 Tuesday.

Yet Abbas has not yet pulled out, indicating that he wants to discuss the issue first with his Fatah party and the Arab League, which is meeting next week.

Abbas said Monday that he will meet with other Arab leaders at the conference on October 4.

In a statement from his office shortly after the moratorium expired at midnight Sunday, Netanyahu asked Abbas to "stay in the talks and, with me, continue on the road towards peace."

On Monday, Abbas called on Israel to extend the moratorium for three or four months while talks continue.

The United States is urging both sides to "show restraint" and wants to see a successful completion of negotiations within one year, Crowley said.

"We believe that we can successfully get by this turbulence that we are experiencing now," Crowley said. "There is absolutely an opportunity for successful negotiations."