Clinton meeting with Abbas, Netanyahu ahead of new peace talks 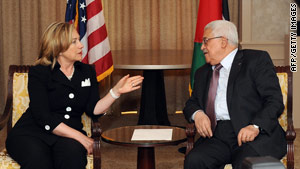 Washington (CNN) -- Two days ahead of the first direct talks between Israeli and Palestinian leaders since 2008, U.S. Secretary of State Hillary Clinton met with two key players in the discussion.

Clinton met at a Virginia hotel with Palestinian Authority President Mahmoud Abbas, and will talk later in the day with Israeli Prime Minister Benjamin Netanyahu.

Ignoring questions from journalists about the historic talks, Clinton joked that she and the Palestinian leader were discussing grandchildren during a brief photo-taking session.

The Palestinian Authority president and the Israeli prime minister will go to the White House Wednesday for a visit with President Barack Obama and the next day will sit down for face-to-face talks at the U.S. State Department -- the first such talks since discussion between the two sides broke down in December 2008.

Clinton's meetings with the leaders came the same day as a shooting in the West Bank that killed four Israelis, including a pregnant woman, Israeli medical sources said.

"We are cognizant that there could be external events that can have an impact on the environment of the peace talks," said U.S. State Department spokesman P.J. Crowley, who was just hearing of the shooting shortly before his daily briefing. "We are also cognizant that there may be actors in the region that are deliberately making these kinds of attacks in order to sabotage the process."

"The attack is not a message to the negotiators -- no message was needed because the negotiations will fail anyway," said Fawzi Barhoum, a second Hamas spokesman.

A statement on the website of the Izzaldin Al-Qassam Brigades -- the military wing of Hamas -- claimed responsibility for the attack.

Before he arrived in Washington, Abbas met with Israeli Defense Minister Ehud Barak in a secret session in Amman, Jordan, the latter's office confirmed. However, officials did not release details about the Sunday meeting.

Netanyahu said before leaving Israel that he is "convinced that if the Palestinian leadership approaches these talks with the same degree of seriousness as [us], we will be able to advance toward a stable agreement that will ensure peace and security for both peoples and will contribute to the security and stability of the region."

Abbas said he is going to Washington with the support of Arab governments.

"We have crossed a long way to reach to these negotiations and our Arab nations have supported us" through a committee of the Arab League that drew up the basis for launching the negotiations, he said.

The goal, Abbas said, was to reach a consensus that "would assure the national rights of our people and end the occupation from all occupied Arab land and provide security and freedom and real peace for all countries of the region and its nations, including our Palestinian people. "

Specifically, he cited an end to the control of east Jerusalem by the Israelis, as well as an end to construction of Jewish settlements in the West Bank.

"We stress Israel's need and our need for security, but security cannot remain a pretext to continue settlement activities and take over our land and deny our rights," Abbas said.

He added that if the talks fail, the Israeli government will be "the only one to be blamed and held responsible."

Netanyahu said he was aware of the difficulties that have derailed such talks in the past and said that the basic question for him was whether the Palestinians are as willing to work toward peace as the Israelis.

"There shouldn't just be a tactical halt between two wars or two outbreaks of terrorism, but a peace based on recognition, security, stability and economic prosperity between the two peoples that will endure for us and our children," Netanyahu said.

He said any agreement would be based on principles, including the recognition of Israel as the nation-state of the Jewish people, ending the conflict and establishing security agreements on the ground.

Abbas, for his part, said Palestinians "hope that we will find in Israel a genuine partner that is capable of taking decisions and responsible measures in order to end the occupation."

CNN's Charley Keyes and Ben Wedeman contributed to this report.