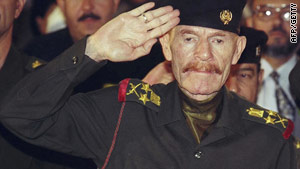 Baghdad, Iraq (CNN) -- An audio message purportedly from the highest-ranking at-large member of Iraq's Saddam Hussein regime has been released.

The speaker is identified as Izzat Ibrahim al-Douri, Iraq's former military commander and vice president who has eluded capture since the fall of the Hussein regime more than seven years ago.

The message -- issued on the occasion of the 1968 bloodless coup that brought the Baath Party to power in Iraq -- saluted people who resist the "occupation."

CNN has not been able to independently verify the authenticity of the voice on the tape, posted Friday on a website devoted to national resistance in Iraq.

There have been at least five other purported audio messages from al-Douri.

Al-Douri, 66, served as vice-chairman of Hussein's Revolutionary Command Council. He has been reported killed and captured during the post-U.S. invasion insurgency, but those reports later turned out to be erroneous.

He is the King of Clubs (No. 6) on the U.S. military's card deck of most-wanted regime officials.

In the message, al-Douri calls himself "secretary-general" of the Baath Party.

The U.S. military says he has helped finance the insurgency against U.S. troops in Iraq with Iraqi funds he transferred to Syria before Hussein's government collapsed in April 2003.

However, the military says his influence has waned while he has been in hiding.

U.S. officials say al-Douri played key roles in the chemical attack on the Kurdish town of Halabja in 1988 and in putting down Kurdish and Shiite revolts after the 1991 Persian Gulf War.