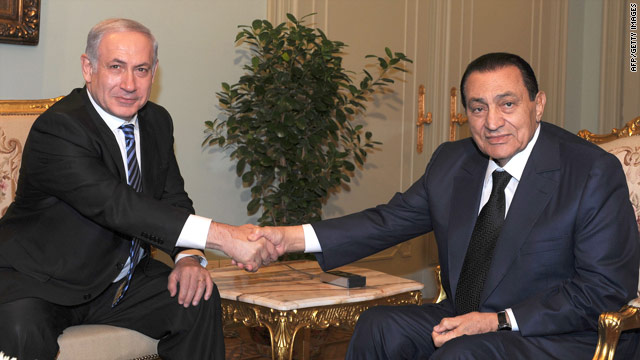 Cairo, Egypt (CNN) -- For some, it may have felt like the diplomatic equivalent of Groundhog Day. Officials, in Cairo, Egypt for another round of talks in the never-ending Middle East peace process.

According to the Israeli daily Ha'aretz, the meeting between Mubarak and Netanyahu was scheduled to last four hours. Not bad for the 82-year-old Egyptian leader. In any event, the meeting was brief.

The main focus of the talks in Cairo was to convince the Palestinians and Israelis to move from, until now, largely fruitless "proximity" or indirect talks to direct negotiations.

Direct talks were suspended in December 2008 when Israel launched its offensive against Gaza. The 2009 election of Prime Minister Benjamin Netanyahu, never a peace process enthusiast, made reviving direct talks all the more complicated.

George Mitchell, a 77-year-old former senator and diplomat, has been trying to coax the two sides back to the table, but the prospects of achieving that, in the words of one Egyptian official I spoke with before the meetings, were "not rosy."

The Palestinians argue that as long as Israel continues to build settlements in the West Bank, expand the Jewish presence in occupied East Jerusalem, and demolish Palestinian homes in the city, direct talks are impossible. They also insist that Israel accept the June 1967 borders as a starting point for a final peace settlement.

The Israelis say that direct talks must go ahead, and only then will Israel initiate confidence-building measures.

Both Abbas and Netanyahu are on shaky ground. Abbas' Fatah faction has already said it opposes direct talks with Israel, and Abbas has little room to maneuver.

Netanyahu sits atop an increasingly shaky coalition, grappling with a foreign minister, Avigdor Lieberman, who has rankled the prime minister's office by appointing an ambassador to the United Nations without first consulting his boss. Any dramatic move in the direction of the Palestinians could cause his coalition to collapse.

Mitchell has the unenviable task of getting them to agree on something, anything. So far, he's failed.

And this is raising questions about the entire American role in the peace process. Egyptian officials, normally very careful when speaking with the media, can't contain their frustration.

The proximity talks "aren't working because the Americans aren't doing their job," said one official, who requested anonymity because of the sensitivity of the issue.

U.S. President Barack Obama's administration came to power talking tough, he noted, but not tough enough to compel the Netanyahu government to freeze all settlement activity in all Palestinian occupied territory, including East Jerusalem.

After President Obama and Prime Minister Netanyahu met in Washington earlier this month for their most cordial meeting yet, the official complained: "Now we find the Americans talking like the Israelis without any justifications." The Obama administration, he concluded, is "confused."

The U.S. says it is pushing to narrow the divide and American diplomats will almost certainly put a positive spin on the talks that took place in Cairo Sunday. But the reality is that, even if there is a peace process to speak of, it's in miserable shape.

It's an uneasy time in the Middle East. On top of faltering peace efforts, there are growing concerns there could be a strike on Iran, whether by Israel, the U.S. or both, to stop what they claim is Tehran's nuclear weapons program.

Iraq is perpetually wracked by violence, tensions are mounting between Hezbollah in Lebanon and Israel, and there is profound uncertainty about the health of Egypt's Mubarak, one of the Arab world's longest-serving rulers and a pillar of American policy in the region.

On the other hand, the U.S. is distracted by a profound economic crisis, partisan political battles, mounting losses in a costly Afghan war, and an environmental catastrophe in the Gulf of Mexico. It's not surprising that the Middle East peace doesn't appear to be Washington's top priority at the moment.

The problem is, when you put the Middle East on the back burner, it often breaks into flames.