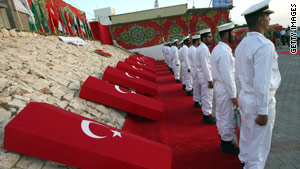 (CNN) -- The Israeli military's chief of general staff has appointed a reserve general to lead "a team of experts" to examine Israel's interception of a flotilla bound for Gaza last week in order to "establish lessons from the event," the Israel Defense Forces said in a statement.

Israeli commandos intercepted the first convoy at sea May 31 and stormed the largest vessel, the Turkish-flagged Mavi Marmara. At least nine people aboard the ship were killed.

Chief of the General Staff, Lt. Gen. Gabi Ashkenazi, tapped Reserve Maj. Gen. Giora Eiland to head the team of experts, defined by the IDF as different from an investigative team because the experts are "a group of professionals with expertise on the matter and were not a part of the operational chain of command during this specific incident."

According to the IDF, the team will "analyze the various investigations" already underway seeking common ground in the findings of the investigations. The team's report is due July 4.

The U.N. Security Council has called for an independent inquiry into the flotilla raid, and the U.N. Human Rights Council has condemned the assault and voted to launch an investigation.

French President Nicolas Sarkozy addressed that issue with Israeli Prime Minister Benjamin Netanyahu during a telephone call Monday, asking Netanyahu "to follow up the United Nations Security Council's calls for a credible, impartial investigation," according to a statement from Sarkozy's office.

Sarkozy told the Israeli premier that France would be willing to participate, the statement said.

Israeli officials have defended the legality of the raid, criticizing those aboard the Mavi Marmara for attacking the boarding party and insisting that they can handle the investigation themselves.