By Ivan Watson and Talia Kayali 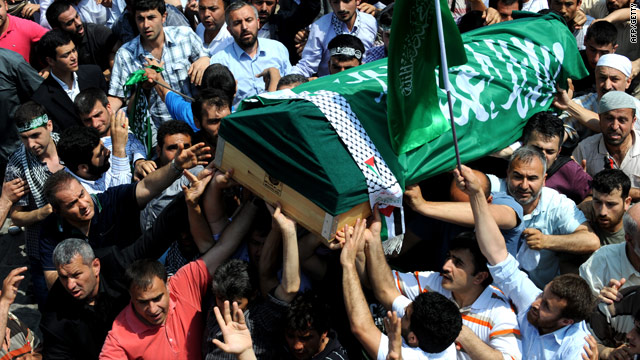 Istanbul, Turkey (CNN) -- Autopsy results by forensics experts in Istanbul revealed that all nine of the men killed by Israeli commandoes aboard the humanitarian convoy that had planned to dock in Gaza died of gunshot wounds.

The autopsy results give clues about how the violence unfolded after Israeli commandoes stormed the Turkish ship Mavi Marmara in the pre-dawn hours on Monday.

One casualty, a 19-year-old dual national Turkish-American citizen named Furkan Dogan, was found to have bullet wounds in his head and multiple bullets in his body, Ince said.

According to the U.S. State department, Dogan was born in Troy, New York and had been living in Turkey. American diplomats have been extending consular services to the deceased's family.

In one case, Ince said, a gunshot victim had been shot at at extremely close range.

"From the analysis of the bullet distance on one of the bodies," Dr. Ince said, "the gun was fired between 2 and 14 centimeters' distance from the victim's head."

In one month, the forensic report will be submitted to an Istanbul prosecutor's office. There have already been petitions from families of Turkish activists this week, submitted to state prosecutors to sue the government of Israel on charges of murder.

The dead activists were treated like fallen heroes at a mass funeral held at Istanbul's Fatih Mosque on Thursday. Crowds gathered in a courtyard, below the domes of the centuries' old Ottoman mosque, in front of the coffins, which were wrapped in Turkish and Palestinian flags. In one case, a flag from the Palestinian movement Hamas lay over a casket.

"We will remember this, what Israel did," said a young Turkish volunteer named Muhamed Sahin, who was helping hold back the surging crowd. "Everybody has to learn what is going on in Gaza, on the ship, what Israel did."

The bodies of the 9 dead, as well as more then 460 surviving passengers from the convoy arrived at Istanbul airport before dawn on Thursday. They were treated to a hero's welcome, particularly Bulent Yildirim, the chairman of the Islamist, fiercely pro-Palestinian Turkish charity the Humanitarian Relief Foundation (IHH). IHH was one of the main groups organizing the blockade-busting flotilla.

In remarks to the press, Yildirim said his colleagues fought Israeli troops in self-defense aboard the Mavi Marmara. He added that in the early stages of the clashes, his activists captured several Israel commandoes, as well as their weapons, and took them below decks.

The Israeli troops were given water, Yildirim said. He insisted none of the activists fired the captured Israeli guns.

Israeli officials have accused the protesters of firing captured weapons during the battle at sea. The Israeli military has also shown images of a commando being beaten with a plastic chair, as well as photos of knives, metal poles, slingshots and marbles as evidence that the Mavi Marmara was a "ship of hatred" full of terrorist sympathizers rather then a "love boat" filled with peace-loving human rights activists.

"The defense of the boat was quite well organized," said Espen Goffeng, a 38-year-old activist from Norway who sailed aboard the Mavi Marmara. "There was a plan to keep soldiers off the boat."

Goffeng said passengers aboard the lead ship Mavi Marmara at first successfully repelled Israeli troops on boats. Then, he said, soldiers began their helicopters assault on the vessel.

"They started off with some kind of paintball bullets with glass in them that left terrible soft tissue wounds. And then rubber bullets. And then live ammunition afterwards. And that's when things started to get really dangerous," Goffeng added.

Despite the tears and sobbing at Istanbul's Fatih Mosque on Thursday, many of the people gathered for the activists' funeral called this week a "victory," because it brought international attention to Israel's 3-year blockade of Gaza.

Turkey, once Israel's closest Muslim ally in the Middle East, has accused Israel of committing an act of international piracy.

"From now on, Turkish-Israeli ties will never be the same," Turkish President Abdullah Gul said on Thursday. "The incident has left a deep and irreparable scar."

According to a spokesman for the Turkish Foreign Ministry, Ankara has issued 3 demands to Israel: apologize for the raid, organize an independent investigation, and lift the blockade of Gaza.