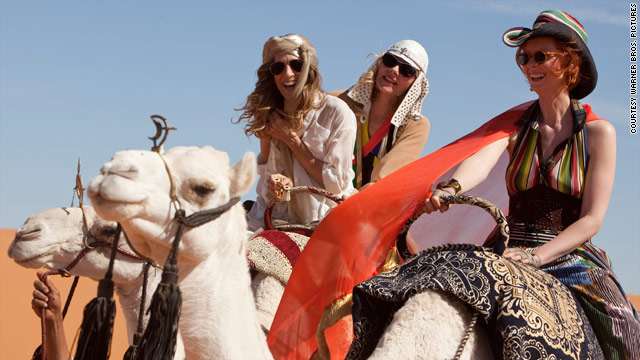 Film too sexy for the city?
STORY HIGHLIGHTS

Abu Dhabi, United Arab Emirates (CNN) -- Carrie Bradshaw and her friends are packing their suitcases, putting on their high heels and heading to Abu Dhabi, where luxury hotels and pristine beaches serve as a glamorous backdrop for their next adventure.

But the "Sex and the City" sequel was actually filmed thousands of miles away in Morocco, because the film's premise is just too racy for the conservative, oil-rich capital of the United Arab Emirates. In fact, officials in the Muslim country's capital may decide the movie is too sexy for their city.

The first "Sex and the City" film wasn't shown in theaters there either.

One moviegoer in Abu Dhabi told CNN that people there would more readily accept the movie if the name were changed.

"It's a shocking title if you consider this part of the world," she said.

But even if the movie never makes it to theaters in the United Arab Emirates, it could have a big impact on the country.

Video: 'Sex' and the Middle East

London-based brand expert Stephen Cheliotis said "Sex and the City 2" could do for Abu Dhabi what the "Lord of the Rings" movies did for New Zealand.

"If any film is set in a location, then it can be a massive boost for that location," he said.

Cheliotis said Abu Dhabi could use the extra attention.

"It does need to get its name out there to raise awareness, so this film could be really important in that respect," he said.

The movie opens in the United States Thursday.