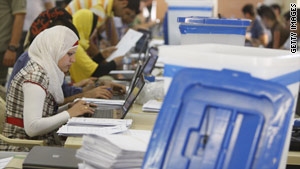 Baghdad, Iraq (CNN) -- Iraqi Prime Minister Nuri al-Maliki has called for a manual recount of the votes cast in the country's tight parliamentary elections, saying he is asking for it to "preserve the integrity of the electoral process."

However, the Independent High Electoral Commission rejected his demand, with spokesman Judge Qassim al-Aboodi telling reporters there must be "compelling reasons" and strong evidence of widespread fraud for the recount.

Votes from the election are still being tallied and the race is too close to call. A secular bloc is ahead in the overall count of votes, although al-Maliki's coalition remained in the lead in several provinces.

In a statement released Saturday, al-Maliki said he was calling for the recount as the chief executive directly responsible for the planning and execution of the country's policies.

"The March 7th elections represented a big step on the road to reinforcing the democratic experience in Iraq; and because of the demands by a number of political blocs for a manual vote recount and in order to protect the democratic experience and preserve the integrity of the electoral process ... I call on the Independent High Electoral Commission to immediately respond to these blocs' demands in order to preserve the political stability and prevent the deterioration of the security situation and the return of the violence that was only defeated after effort, blood and hardship."

But in a news conference following a commission meeting, Al-Aboodi and Faraj al-Haidari, head of the commission, both defended the balloting, which took place under observation by political blocs and observer groups including the United Nations, saying it was transparent.

The vote count was open and took place at count centers, they said. It was attended by representatives from the political blocs, who could have filed complaints within 48 hours. Some 2,000 complaints were filed and are being investigated, the commission officials said.

However, they said a recount cannot take place based on unfounded accusations. Such a process would involve bringing in some 300,000 employees who took part in the vote process and in counting the ballots, al-Aboodi said, adding, "That is near impossible."

If a political bloc has doubt about the results in a certain polling center, it cannot ask for a citywide or a national recount, al-Haidari said -- that would be like asking for another election. He said the concern stems from the tight race, and called on officials to be patient.

Final results will be announced Friday, he said.

In recent days, members of al-Maliki's State of Law coalition and other top blocs have alleged voter fraud as the margin of votes separating the candidates has narrowed.

"As the president of the republic who is tasked with preserving the constitution ... and in order to guarantee complete integrity and justice, I call on the Independent High Electoral Commission to start a manual recount as of Sunday March 21st," he said.

Election observers and the United Nations, which is assisting the electoral commission, have said that there were no signs of large-scale fraud or vote manipulation.

Last week, the High Electoral Commission agreed to provide all political blocs with CDs containing scans of their tally sheets, after fraud allegations by different political blocs in the past week, al-Aboodi said. The blocs can compare those tally sheets to their own, he said. The tally sheets for thousands of stations have been provided, and more will be provided on Sunday, he said. So far, none have come back with discrepancies.

Al-Maliki's coalition called on its supporters to rally in Najaf on Sunday against the vote count. Afaq TV, which is affiliated with al-Maliki, said the coalition will reject results that have not been manually counted.

As of Sunday, al-Maliki's coalition remained in the lead in seven of the country's 18 provinces, including Baghdad province, according to partial preliminary results released by the Independent High Electoral Commission.

Baghdad province, which includes the capital city, is the most populous, and represents 68 of the 325 parliament seats.

But in the overall vote count, former interim Prime Minister Ayad Allawi's al-Iraqia bloc has moved ahead by more than 7,000 votes, according to the partial preliminary results. Allawi's bloc holds the lead in five provinces.

The parliamentary seats will be distributed in each province through an allocation formula, not by popular vote.

The results released Sunday are based on 95 percent of the votes counted. The 95 percent figure is the national total -- the percentage counted in individual provinces varies.

Al-Aboodi said earlier the commission canceled 57 polling stations for voting irregularities and another for a procedural violation. The canceled stations do not affect the turnout figures or results, he said.

The preliminary partial results appear to show that Iraqis voted along sectarian lines.

Allawi's secular al-Iraqia bloc appears to have won in provinces with large Sunni populations, including the volatile Nineveh province, which is allotted the second-largest share of parliamentary seats after Baghdad province.

Allawi, who served as prime minister in 2004, is a secular Shiite and his bloc includes prominent Sunni Arab politicians, including Vice President Tariq al-Hashimi.

The Shiite vote appeared largely divided between al-Maliki's State of Law alliance and the Iraqi National Alliance, the Iran-backed group that includes some of the country's top Shiite religious parties.

In the three provinces in Iraq's semi-autonomous region of Kurdistan, Kurdish parties garnered most of the vote, as had been expected.

Although the bloc that wins the most seats in parliament will be tasked to form a government, it appears that none will win the 163 seats needed for a majority in the 325-member Council of Representatives. As the votes are tallied, politicians have been negotiating to bolster postelection coalitions.

This time, unlike last time, the country's Sunni Arab minority turned out in high numbers for the vote.

In 2005, they largely boycotted the election, and felt marginalized when a Shiite-led government emerged.

The results of that election helped fuel the insurgency, escalating a bloody sectarian war.

There are concerns that the results of this election could reignite sectarian violence should the Sunnis again feel marginalized.