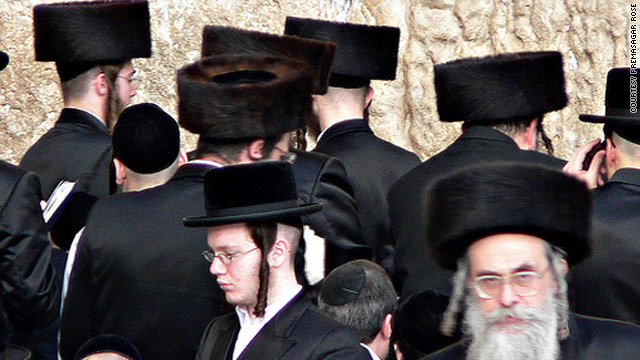 Ultra-orthodox Hassidim at the Western Wall in Jerusalem. The bill to ban fur in Israel includes a "cultural exception" allowing them to continue wearing the tall, furry "shtreimel" if the bill were to become law.
STORY HIGHLIGHTS

(CNN) -- It started with a graphic documentary on Israeli TV showing cats and dogs being skinned alive for their fur. The program also reported some clothes claiming to be made of synthetic fur were in fact made of real pelt.

Legislation was proposed amid a public outcry, and now former sex symbol Brigitte Bardot and singer Paul McCartney have joined the campaign to make Israel the world's first fur-free country.

"I would like to thank you personally for your help and support promoting the law against the commerce of fur in Israel," the French actress-turned-animal-rights activist said in a letter to members of Israel's parliament, the Knesset.

Meanwhile, the former Beatle, a vegetarian for many years, wrote on his Web site: "By banning the fur trade, Israel would be providing a moral lead to those countries and showing what can be done."

They are among many watching closely as politicians debate the proposal to ban the import, production and sale of all animal fur in Israel.

Ninety-five percent of the country's textile products, which include fur, are imported from China. If passed, the bill could set a precedent in other countries.

"We [have] had a lot of support for this bill," Jane Halevey, head of the International Anti-Fur Coalition, told CNN. "The bill was validated by the government -- they had approved it."

In Israeli politics, if a proposed bill is validated by the government, it is likely to become law, according to Halevey. Israeli daily newspaper, Haaretz, also reported last week the country would soon have a total ban on fur. Exceptions will be made for the pelts and fur of cattle, camels, goats and sheep.

We ... have a lot of public support. Everyone in Israel hates fur.
--Anti-fur campaigner Jane Halevey
RELATED TOPICS

The proposed law has much backing, Halevey said: "We also have a lot of public support. Everyone in Israel hates fur."

The original report revealing the fur-labeling problem was produced by the Society for Prevention of Cruelty to Animals in Israel and aired in February 2009 on Channel 10.

The day after, Halevey got three separate emails from politicians proposing bills to ban fur, she said.

"I was shocked," Knesset member Ronit Tirosh told CNN. "[I thought] 'We have to do something.'" Tirosh's proposed law is the one currently being debated.

The Kadima-party member said she did not expect much opposition. "I didn't think there would be a problem in Israel because of the hot weather, there are not so many people wearing fur," said Tirosh. Bordering Egypt and Lebanon, temperatures in Israel can soar above 30 degrees Celsius in summer.

Israel's tiny fur industry is worth around $1 million a year, according to Halevey. "There are maybe five fur shops in Israel," she told CNN.

It may be a small industry in Israel, but fur sales worldwide amount to more than $11 billion a year, according to 2004 figures on the International Fur Trade Federation Web site.

Wild fur represents about 15 percent of the world's trade in fur. The International Fur Trade Federation denies the use of domestic cat and dog fur and there are voluntary bans on its use in the EU and the United States. It admits China does produce "a lot" of fur for export.

The international fur industry is aware of the message a ban could send to the rest of the world and representatives have been attending committee meetings.

"It is not a big lobby but it is a very strong one," said Tirosh. "We have a little difficulty now," she added.

A spokesperson from the International Fur Trade Federation told CNN: "There is no justification for a trade ban in Israel or anywhere else. The fur trade takes a responsible attitude to welfare and conservation."

One faction the fur-ban activists did not reckon with, though, were the ultra-orthodox Hasidim Jews, notable for their distinctive clothing.

They objected to the all-out fur ban, saying it was going against their traditions, because they would be unable to wear the round furry hat, known as the shtreimel.

The bill had now been amended to include a "cultural exception" that will allow the Hasidim to keep wearing fur to preserve their traditions.

The bill is now being prepared for another reading this week although Tirosh does not expect it to be passed before Knesset members take a two-month break. Anti-fur advocates remain optimistic, though.

"I really believe this bill will pass," said Halevey. "It's just fixing something that's not right."