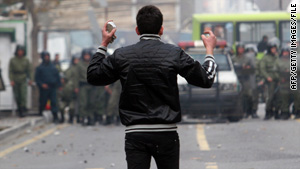 Iran's judiciary said those arrested were funded by the United States beginning in 2006 and that they planned to destabilize the country, according to Fars.

A State Department spokesman declined to comment on the report Saturday night.

One branch of the project, dubbed the "Iran Proxy," was capable of infiltrating Iran's data banks, sabotaging its Web sites, and facilitating contacts between Iranian opposition figures and U.S.-funded media like Voice of America radio and Radio Farda, according to Fars.

The judiciary also said the United States used anti-filtering software during recent demonstrations against the Iranian government to wage psychological war against the nation, Fars reported.

Iranian media reported last month that individuals alleged to have ties with Radio Farda -- which means Radio Tomorrow in Iran's Farsi language -- were among seven arrested by the Iranian government.