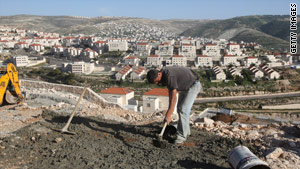 A man works at a Jerusalem contruction site. On Tuesday, the U.S. denounced plans to build similar housing.
STORY HIGHLIGHTS

"I condemn the decision by the government of Israel to advance planning for new housing units in East Jerusalem," Biden said in a statement issued just hours after he met with Israeli leaders in the region.

"I don't believe that either the substance or the timing [of the announcement] is particularly helpful, and I think [it] runs counter to the very productive talks the vice president was having in the region," Gibbs said.

Biden is the highest-ranking member of the Obama administration to visit Israel, and he emphasized America's close ties with Israel earlier Tuesday during meetings with top Israeli leaders. He said the bond between the two nations is unshakable.

On efforts to restart the peace process, Biden said, "We are at a moment of real opportunity. I think that the interests of the Israeli and Palestinian people, if everybody stops and takes a deep breath, are actually more in line than they are opposites."

After the plan for construction was announced, lead Palestinian negotiator Saeb Erakat said the Israeli government is "determined to undermine" efforts to jump-start peace negotiations and called the plan "a disaster."

The area where the construction is to take place is "in occupied Palestinian territory, and that's the issue we are supposed to negotiate, and now they are dictating rather than negotiating," Erakat said.

The minister of interior did not approve the plan, as expanding an existing neighborhood is in the hands of the district committee, the ministry said.

However, Meir Margalit of the Jerusalem Municipality -- representing the leftist party Meretz -- said the ministry's planning and building committee is a political committee that acts under the minister's political guidance. Even if objections are voiced in the 60-day period, he said, most are ignored.

The claim that the minister had no hand in the decision is a "complete lie," Margalit said. "The minister decides his office's policy, including that of the committee."

In a later announcement, the Interior Ministry said the plan has taken more than three years to come to fruition and is a "procedural stage as part of a longer procedure which would take quite some time to complete."

"The timing of the committee meeting was preset and has nothing to do with the American vice president's visit to Israel," the ministry said.

The announcement came a day after George Mitchell, the Obama administration's special envoy for Middle East peace, announced that Israeli and Palestinian leaders had accepted indirect talks aimed at restarting direct talks. Negotiations between the two sides have been stalled for over a year.

In announcing those indirect talks, Mitchell, who is also visiting the region with Biden, encouraged both sides to refrain from any statements or actions that could inflame tensions or prejudice the outcome of the talks.

Israeli Prime Minister Benjamin Netanyahu said in January his government made a series of concessions to the Palestinians, including a 10-month moratorium on West Bank settlement construction and the removal of dozens of checkpoints and roadblocks. However, Palestinian Authority President Mahmoud Abbas had refused to re-enter negotiations until Israel enacted a complete freeze of all settlement construction in the West Bank and East Jerusalem.

On Monday, Erakat expressed skepticism about the indirect talks, pointing to Israeli approval of 112 apartment units in a settlement in the southern part of the West Bank near Bethlehem.

Abbas told Mitchell, Erakat said, that "if every visit is going to be announced by more settlements and unilateral declarations and imposing reality on the ground ... this places a question mark on all the efforts that we are undergoing."