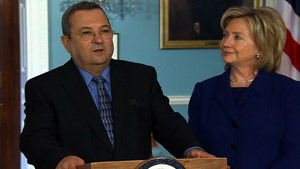 "Iran is not just a challenge for Israel. I believe it is a challenge for the whole world," Barak said in a speech in Washington. "I can hardly think of a stable world order with a nuclear Iran."

Barak said he doubts that Iran is "crazy" enough -- he used the Yiddish word "meshugah" -- to launch a nuclear attack against Israel, but warned the existence of a nuclear-armed Iran could endanger the region, disrupt oil supplies and empower Iran's terrorist allies.

"I don't think the Iranians, even if they got the bomb, are going to drop it in the neighborhood," Barak said. "They fully understand what might follow -- they are radical but not total 'meshugah.' They have a quite sophisticated decision-making process and they understand realities."

Iran maintains it is interested in nuclear development only for power-generation and other civilian uses. But Barak said all countries must reject what he called "the verbal gymnastics" Iran uses to justify its nuclear research.

"It means they are not just trying to create a Manhattan-project-like crude nuclear device," he said. "They are trying to jump directly into the second or second-and-a-half generation of nuclear warheads that could be installed on top of ground-to-ground missiles with ranges that will cover not just Israel, but Moscow or Paris."

I don't think the Iranians, even if they got the bomb, are going to drop it in the neighborhood. They fully understand what might follow.
--Ehud Barak, Israeli defense minister
RELATED TOPICS

After his speech to the Washington Institute for Near East Policy, Barak met with Secretary of State Hillary Clinton at the State Department. The United States is working to rally international support for more stringent economic sanctions against Iran.

"Iran is not living up to its responsibilities and we are working with our partners in the international community to increase pressure on Iran to change course," Clinton said in a photo-taking session with Barak.

On efforts to revive stalled peace talks between Israel and the Palestinians, Barak said most Israelis are prepared to do what is needed.

"There is a strong, silent majority in Israel which is ready to make tough, painful decisions to reach peace once they feel there is readiness on the other side and we are not having this tango alone," Barak said in his speech.

He insisted that Israel will seek peace and protect its security.

"We have to stand firm on our two feet, open-eyed, without a drop of self-delusion about the realities of our neighborhood, but having one hand, preferably the left hand, looking for any window, turning every stone in order to find opportunities for peace, while the other hand, the right one, will be pointing a finger, very close to the trigger, ready to pull it when it is ultimately a necessity," Barak said.