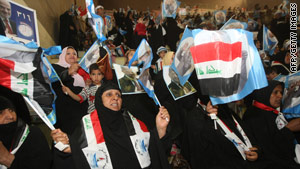 The pilots' aircraft "made a hard landing" near an airfield on a U.S. base in northern Iraq, a military statement said. "There were no enemy forces present, and no hostile fire was reported."

The soldiers were assigned to Task Force Marne, which is responsible for U.S. operations in northern Iraq. The location of the base and the soldiers' identities were withheld pending family notification.

Meanwhile, at least 10 Sunni worshippers were wounded Sunday when a suicide bomber detonated his explosives outside a Sunni mosque outside Tikrit, police said.

The attack occurred about 6:15 p.m. at the Abi Manar al-Alami mosque in the town of al-Alam, east of Tikrit, police officials said.

Its imam, who has the same name as the mosque, has urged people to respect the Iraqi security forces and the law, and had issued a fatwa to forbid attacking Iraqi police and army, police officials said.

Tikrit, the hometown of former Iraqi leader Saddam Hussein, is located in Salaheddin province, about 100 miles (160 kilometers) north of Baghdad.