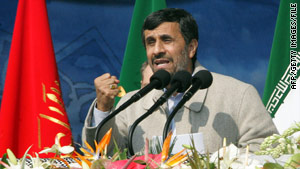 Iranian President Mahmoud Ahmadinejad has appeared to float the idea of a prisoner swap regarding the three Americans.
STORY HIGHLIGHTS
RELATED TOPICS

(CNN) -- In a heartfelt letter to Iranian President Mahmoud Ahmadinejad, the mothers of three American hikers held in Iran said they have applied for visas to visit Iran and ask to meet with him in Tehran.

"We would be honored to tell you in person who our children are and why they do not deserve to continue to be held in detention without any contact with the outside world," said the letter released Monday from Cindy Hickey, Norah Shourd and Laura Fattal.

Their children, Shane Bauer, Sarah Shourd and Josh Fattal, respectively, were detained in Iran on July 31 when they accidentally strayed across an unmarked border into Iran while on a hiking trip in Iraq, according to their families. They are being held on espionage charges.

"Shane, Sarah and Josh have now been detained for 200 days," the letter said. "During that time, they have not been allowed to make a single telephone call to us or write us one letter. For more than three months, we have had no independent information about our children's physical health or their state of mind."

The hikers' most recent consular visit from Swiss diplomats was October 29, according to the letter. The families said they have asked an Iranian attorney to represent the three, but the lawyer was refused access to them.

"We struggle to understand why our children have been denied any contact with us," the letter said. "We cannot explain why for more than six months, Iran has not found it in its heart to demonstrate magnanimity toward our children -- young travelers whose only mistake appears to have been to lose their way on a hiking vacation."

Hickey, Shourd and Fattal said they applied January 6 for visas to visit Iran "in the hope of seeing our children in Evin Prison."

Earlier this month in a nationally televised interview, Ahmadinejad said negotiations were ongoing regarding the hikers but appeared to float the idea of a prisoner swap.

"We don't like anyone in jail or in prison, but these people have violated our borders and it has a defined penalty," he said, adding there are Iranians "languishing within American jails. ... We are approaching this from a humanitarian perspective and see how it goes."

But U.S. Secretary of State Hillary Clinton said there were no negotiations taking place between the United States and Iran regarding the hikers, and "it is hard to know what the Iranian president meant."

"We believe they're being unjustly detained and that they should be released without further delay," Clinton has said of the hikers.

Two Belgians who were recently detained for three months after being arrested while visiting Iran said in January they had had "some contact" with the three Americans and were "deeply concerned about their well-being."

"We were freed without a trial and hope that the hikers will be freed as soon as possible," Idesbald van den Bosch and Vincent Boon Falleur said in a statement. "We do not know the current conditions of their detention since we left Evin Prison on December 8, 2009. At that point, [the three] were still in solitary confinement."

The Belgians said their detention was psychologically stressful "especially during interrogation and solitary confinement."

In their letter to Ahmadinejad, the hikers' mothers quoted Archbishop Emeritus Desmond Tutu, who this month also urged Iran to free the three.

"You too are a parent, Mr. President," the letter said. "Surely you understand the depth of our distress, and the hopelessness we feel after appealing to you time and again to show our children the compassion they deserve, irrespective of their land of birth. We hope you will look favorably on our request this time and restore our faith in human kindness."