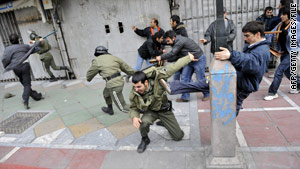 Tehran, Iran (CNN) -- An Iranian court has sentenced one person to death and eight others to prison for their parts in anti-government demonstrations in December, the semi-official Fars news agency reported Tuesday.

The nine defendants were tried last week over their roles in protests during the Shiite Muslim holy period of Ashura, Fars said, quoting the Tehran judiciary's public relations office.

There now are 10 people sentenced to death and awaiting appeal in connection with the protests.

Two men already have been executed for participating in anti-government demonstrations, but a lawyer for one of them said her client was already in jail when the protests began.

The nine people tried last week were convicted of conspiracy against the government and "waging war against God," an extremely serious charge that some Iranian lawmakers have pushed to carry an automatic death penalty. All can appeal their sentences, Fars reported.

Sentences of imprisonment and fines against 35 others have been upheld on appeal, the Iranian Students News Agency said. They were convicted of attacking security personnel, arson and damage to private and public property, and other charges.

News of the latest sentences came during what is normally a week of celebrations in Iran, marking the anniversary of the overthrow of the monarchy on February 11, 1979.

A fresh round of protests that began in late December marked the deadliest clashes since the initial protests in the summer.

At least seven people were killed and hundreds were arrested, witnesses said, as they took to the streets on Ashura, December 27.

In January, authorities hanged Mohammed Reza Ali Zamani, 37, and Arash Rahmanipour, 20, who had been convicted of being enemies of God and plotting to topple the Islamic regime.