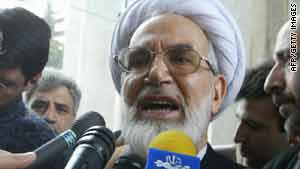 (CNN) -- A major Iranian opposition leader slammed his country's regime Wednesday and what he termed its tyrannical behavior after the disputed presidential elections in June.

Mehdi Karrubi spoke out a day after reformist and opposition leader Mir Hossein Moussavi criticized the government, saying remnants of the "tyranny" and "dictatorship" that prevailed under the toppled Shah of Iran's regime persist today.

Karrubi, whose statement appeared on Moussavi's Web site, denounced "tyranny, arrests and imprisonment of journalists, students and political activists, show trials, executions, and heavy-handed sentencing of those who are unjustly and wrongly accused as well as a greatly increased military environment."

Their statements came as the regime marks the anniversary of the Islamic Revolution.

The authorities are holding a series of events to commemorate the Shah of Iran's overthrow. Celebrations began this week and culminate on February 11. Moussavi and Karrubi have urged supporters to demonstrate.

Iran appears to be trying to clamp down even more tightly on opponents as the anniversary approaches.

Kaveh Ghasemi Kermanshahi was taken by security agents who searched his home and took personal belongings including his computer, the International Campaign for Human Rights in Iran said in a statement, calling him "one of the most important sources of objective human rights information and analysis in Iran."

It is not clear where he is being held. There was no immediate independent confirmation of the arrest.

Iran has been trying and executing people accused of demonstrating against the June 12 presidential election victory of incumbent Mahmoud Ahmadinejad. In the final results, Ahmadinejad was declared the winner over Moussavi, a result seen by many Iranians as questionable or rigged.

The initial protests broke out last summer and have persisted. At least seven people were killed and hundreds arrested, witnesses said, as they took to the streets on Ashura, a Muslim holy day which occurred on December 27.

Karrubi said the post-election tumult has been "the greatest threat to the memory" of the late Ayatollah Khomeini, who ushered in the new state called the Islamic Republic of Iran in 1979, and "the blood of the martyrs during the last three decades."

"An acceptance of the rights of the people and the legitimacy of these rights is the only way to exit the current situation" -- a situation that he says has "deteriorated to the point that even the closest and most loyal comrades" of Khomeini "are no longer safe" from "malicious elements."

Karrubi urged all people to participate in the anniversary ceremonies and "strive to seek all of the achievements and hopeful values that have either been forgotten by many or have been replaced by perversions."

"We will do this by abstaining from any and all violence, physical or verbal."

Karrubi decried the state of affairs in the country. He called "the people" the "true owners of the revolution" and said they "are living under very difficult conditions, due to a variety of reasons; everything from political pressures, lack of security and particularly lack of attention to citizens' rights."

Denying such conditions, he said, won't "change the tangible truths of everyday life, even if they (authorities) label it as a conflict or others speak of it as a crisis. One of the greatest and ongoing difficulties of our nation today is the denial of and acknowledgment of these problems."

He called for respecting the rights of the electorate, "unconditional release of political prisoners," "an open and secure environment for the press," "the return of calm and stability to the universities," and a lifting of an atmosphere of "fear and increased militarization."