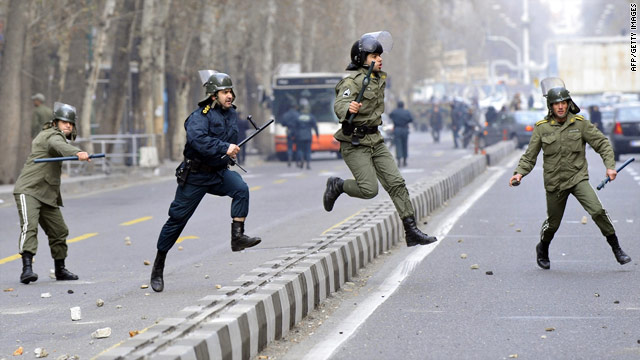 Many of the protesters e-mailed images worldwide of demonstrators clashing with police, filling the void created by strict government controls on foreign media outlets.

Protesters were also active on social networking sites including Twitter and Facebook where one pro-democracy page has more than one quarter of a million members.

The mass arrests that followed the protests have led to widespread accusations of authorities torturing and otherwise abusing prisoners.

A report released Sunday by an Iranian fact-finding committee found that 147 detainees held after last summer's post-election protests were stuffed into a small room, deprived of adequate food and subjected to other mistreatment, Iranian media reported.

The 147 detainees at Kahrizak Detention Center were held with 30 additional inmates for four days in a 750-square-foot room lacking proper ventilation, the parliamentary report found, according to the semi-official Mehr News Agency.

The fact-finding committee blamed former Tehran prosecutor Saeed Mortazavi for the decision to send the detainees to Kahrizak -- usually reserved for rapists and other dangerous criminals -- instead of Evin prison, which had informed Mortazavi that it had the space for them.

"Even if Evin prison had been full, it was not justified to send other offenders to this special site," the investigation found, according to Mehr.

Iran's supreme leader, Ayatollah Ali Khamenei, ordered the Kahrizak facility shut down after reports of mistreatment surfaced. Three prison officials have been charged with premeditated murder in the beating deaths of three imprisoned protesters. According to the investigation, Mortazavi had claimed the three died of meningitis, Mehr said.

"The deaths of some detainees were a result of beatings and neglect of the physical condition of the injured by the detention center's officials," an excerpt of the report said on the Mehr Web site.

The investigation did not reveal evidence of rape or sexual abuse, as alleged by reformist Mehdi Karrubi, Mehr and state-run Press TV reported.

Karrubi, a former parliamentary speaker, and fellow reformist Moussavi, had publicly accused the government of allowing rape, torture, wrongful deaths and secret burials of several detainees. Karrubi had been especially vocal about the claims of detainee rape -- even publishing a first-hand account of one alleged victim on his Web site in October.

The parliamentary committee met with Karrubi about the claims, but he "did not present any convincing evidence or reliable documentation of the alleged abuse," Mehr said the report found.