Explosive found in parcel at Greek Embassy in Rome 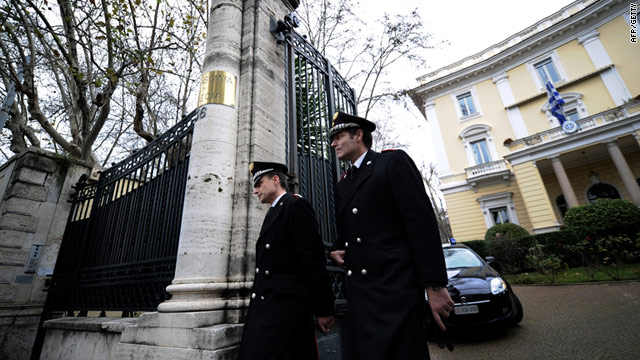 Italian Carabinierei outside the Greek embassy in Rome on December 27, 2010 after an explosive package was found there.
STORY HIGHLIGHTS

(CNN) -- Italian police on Monday found an explosive package at the Greek Embassy in Rome, the second time in as many weeks that embassies there have received explosives through the mail.

The parcel did not explode, and authorities hope that it will provide information that will help in their investigation.

Police also responded to other reports of suspicious packages at the Venezuelan and Danish embassies in Rome and possibly other embassies as well on Monday.

But only the Greek embassy package contained an explosive, according to Francesco Tagliente, the chief of police in Rome.

"The alarm system has worked," Tagliente said. "Since this morning, all the embassies that had a suspected package alerted the police in enough time to determine whether the packages were dangerous and prevent any injuries."

Late last week, an anarchist group claimed credit for a pair of mail bombings Thursday at embassies in Rome, vowing in messages that it plans more such acts to "destroy the systems of domination," the state-run ANSA news agency reported.

Tagliente said that Monday's packages, which included a note from the FAI, were "certainly related" to the ones last week.

Computer-written notes were sent in small boxes along with the earlier package bombs, according to ANSA. The messages read: "We have decided to make our voices heard again, in words and deeds. We will destroy the system of domination. Long live FAI. Long live anarchy."