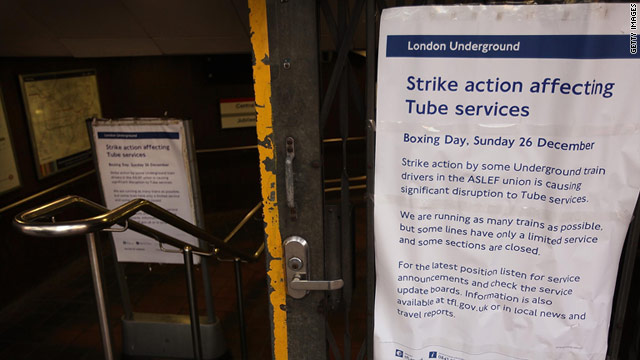 ASLEF, a trade union for the drivers, had asked for triple pay and a day off for drivers working on December 26, a national holiday.

The Tube ran between 20 and 25 percent of its services Sunday, said a spokesman for Transport for London, the government group in charge of public transportation services around the capital.

Some lines were impacted by the strike, while others were undergoing scheduled engineering work, he said. Bus services were run at full capacity to support shoppers, the spokesman added.

London's underground train system is commonly referred to as the Tube.

"Throughout the day there were various services to move passengers, and it was in no way a complete devastation as the union had predicted," the spokesman said, adding that a number of ASLEF drivers reported to work despite the one-day strike, as did drivers represented by the RMT trade union.

In the absence of ASLEF drivers, other unions can provide drivers.

"Drivers felt they shouldn't have to work day after Christmas, and if they do, they should get the extra pay," said Chris Proctor, a spokesman for ASLEF.

Transport officials turned down the request.

Unions signed an agreement that gives them increased leave time and pay on condition they work some holidays, including Boxing Day, London Underground officials said in a statement.

"By holding Londoners to ransom in this way, they are showing complete disdain for all who want to visit family and friends or hunt a good bargain during what is one of the busiest shopping days of the year," London Underground said.