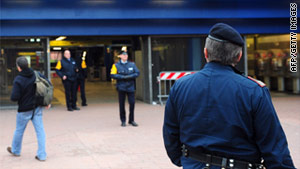 Rome (CNN) -- A black box with wires hanging out of it was found under a train seat Tuesday, sparking a bomb alert, Italian police said.

But the device could not have exploded, police spokesman Agostino Vitolo said. It is not clear who left it, Rome city hall spokesman Marco Dell'Asta said. There has been no claim of responsibility.

Rome Mayor Gianni Alemanno called the news "worrying" but insisted that all of Rome's metro stations are safe.

"I can guarantee to all the citizens that all the metro stations have been cleared," he said. "There is no ulterior danger."

Train officials found a package containing the device about 10 a.m. at the Rebibbia stop on the outskirts of the city, Dell'Asta said. A police bomb squad and the fire brigade went to the scene, he added.

The device was in a plastic bag, police spokesman Andrea Proietti said.

The train driver inspecting the train at the end of the line found it and called the police immediately, he said. Only train staff were on board at the time, he said.

Police removed the device and initially concluded that the package contained a potentially explosive cylinder, he said.

The metro line continued to operate normally after the package was removed. No one was hurt, Proietti said.