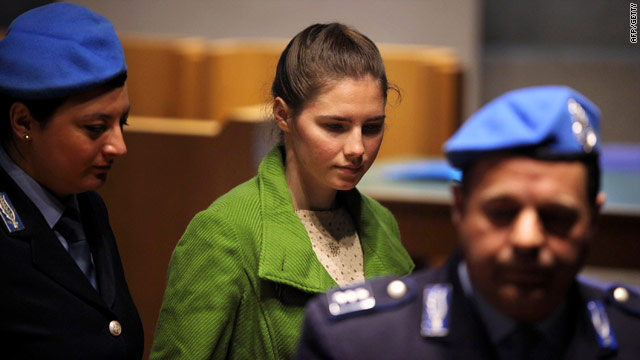 Amanda Knox - photographed during her trial in December 2009 in Italy - was ordered to face a new trial on slander charges.
STORY HIGHLIGHTS

She and her parents are accused of defaming Italian police in the wake of her arrest for the killing of Meredith Kercher. Monday's hearing determined that there is enough evidence to try her.

The case involves her allegations that police mistreated her in custody. Her parents face charges for repeating Knox's allegations.

He pointed out that Knox was facing a judge and prosecutor who had been involved in the case before.

"Was there ever hope for an unbiased ruling with this line up? There never was any in our eyes," he told CNN.

"We will be asking that the case be... moved to Florence" because the family considers the court system in Perugia to be biased, he said.

"Amanda made a statement today in court and in that statement she was clear as to her position," he said. "She never wanted to make unjust accusations. She only wanted to defend herself, and had the police recorded the interrogation, she would not be in this mess today, and her position and statements would be confirmed by those recordings."

Mellas said Knox did not claim to have been "beaten" by police, but hit on the back of the head.

Knox wore black pants and a dark green sweater for her court appearance in Perugia, Italy. She wore her short hair pulled back from her face.

Knox, 23, is also planning an appeal of her murder conviction. The appeal is due to begin November 24.

Knox was sentenced in December to 26 years in prison for the murder of the British exchange student in Perugia, Italy.

Knox and her former Italian boyfriend, Raffaele Sollecito, 26, were both found guilty of Kercher's murder.

A third person, Rudy Guede, a drifter originally from the Ivory Coast, was tried separately and is serving a 16-year prison sentence.