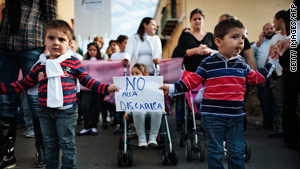 People protest a new dump on the slopes of Mount Vesuvius near Naples, Italy. The sign reads "No to the dump."
STORY HIGHLIGHTS

Rome, Italy (CNN) -- The Italian government said it would halt the construction of a controversial landfill near Naples, but the assurance was not enough for protesters who clashed with police Saturday night, injuring six police officers.

Residents were protesting not only the building of a new landfill, but the conditions of an existing landfill, which they said pose an environmental and health hazard.

Guido Bertolaso, the chief of Italy's civil protection agency, was named by the government to deal with the issue. He told reporters that the government would put the second landfill on hold and the current landfill will be analyzed for any dangers to people or natural resources.

Bertolaso met Sunday with the mayors of the towns in the landfill area in Naples to restate the governments position. But the mayors have not agreed to Bertolaso's proposed compromise. Another meeting has been scheduled for Tuesday.

"We are going to continue these battles and I believe that we'll obtain what we want," said Domenico Auricchio, mayor of Terzigno. "I only ask my citizens to have faith in the local institutions. We'll continue to battle to the end, but now I ask that these acts of vandalism stop because they don't bring any thing good to any one."

Another nearby mayor, Gennaro Langella of Boscoreale, said, "Our citizens have asked for a bigger guarantee that a second landfill would not be open. It has not been possible to obtain that and therefore we don't think we can sign the document."

Despite the lack of agreement, Bertolaso said the government will move forward unilaterally with its proposals. He also said that garbage in Naples, which has been piling up on streets, will be cleared within four days.

Last week, Italian Prime Minister Silvio Berlusconi promised that "within 10 days, the situation should be brought to normality."

He said the current landfill poses no risk to the residents.