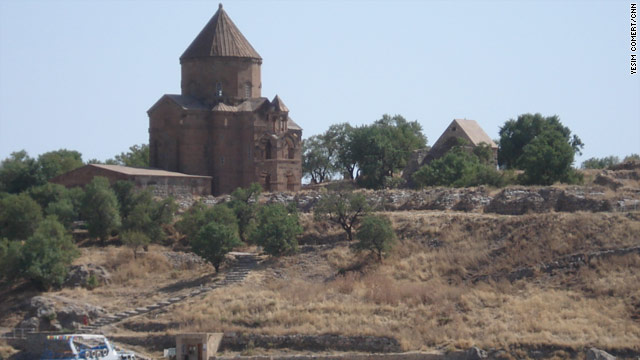 This is a region of remarkable natural beauty: a lake ringed by craggy mountains that at the height of summer, are still dotted with patches of snow. And yet Cunduz' small boat appears to be the only vessel out on the water.

That may soon change.

For the first time in nearly a century, the Turkish government will allow Armenian Christians to hold a prayer service in one of the area's oldest and most famous churches.

More than two months before the scheduled September 19th church service, nearby hotels were booked solid. Cunduz is hoping for a burst of new tourist business.

"I hear up to 10,000 Armenian visitors will be coming," he says, as he steers his boat towards a small island at one end of the lake.

Nestled amid the rocks, stands a stone church with a pointed dome. Armenian Christians built it 11 centuries ago. The only way to get to Akhtamar Church is by boat.

Visitors have to climb up a steep pathway to reach the church's low entrance, where on a recent visit, chanting echoed from inside the building.

Inside, a man was seated barefoot in lotus position on the floor, singing. His voice echoed off vaulted ceilings decorated with hand-drawn icons painted cobalt blue and charcoal black.

"This is a museum. Prayer is illegal in here," the guard explained. "Even if someone comes and reads a poem out loud, even if a Muslim prays here, we have to stop them."

He offered the man a candle, and directed him towards a dark alcove in the church where visitors were invited to light candles.

The singer turned out to be Father Anno Schulte-Herbrûggen, a visiting Catholic priest from Austria.

"At least they cannot forbid me to pray silently," Father Anno later said.

A few years ago, the church's roof was leaking, its ancient icons in danger of being destroyed.

The Turkish government embarked on a million dollar restoration of the building. It was re-opened in 2007, but this month will mark the first time Armenians will be allowed to pray here.

The church is an architectural gem. Its rock exterior is decorated with ornately carved sculptures of warriors, saints and gargoyles. The façade is also scored with countless small crosses and Armenian messages, apparently graffiti carved into the rock by pilgrims over the centuries.

"This place is really wonderful!" exclaimed Dilan Bal, an ethnic Kurd from Switzerland. "It's a church and we are Muslims... so its interesting."

Bal and several other friends from Europe had been performing impromptu folk dances inside the church. They were among the day's handful of visitors to Akhtamar.

The church stands as a lonely symbol of a culture that has all but disappeared from this corner of Eastern Turkey.

Communities of Armenians once thrived along the shores of Lake Van. Many were pushed out in 1915, however, when hundreds of thousands of ethnic Armenians were marched into the desert and massacred by Ottoman Turkish troops.

Today, Armenians call the Ottoman-era massacres "genocide," a term that is angrily rejected by the Turkish state.

Some observers hope Sunday's church service will mark a step towards healing the deep scars left by this bloody chapter of history.

But suspicion between Armenians and Turks still runs deep.

Armenians have objected to the Turkish government's decision not to allow a cross to be placed on the dome of the roof. In recent weeks, Turkey has allowed a cross to be erected on the grounds in front of the church.

Meanwhile, in October 2009, Turkey and Armenia signed U.S. and European-backed agreements aimed at restoring normal diplomatic relations between the two neighbors. But as of this month, the Turkish-Armenian border, which is located less than 200 miles from Akhtamar Island, still remains closed.

"The church, it belongs to the Armenians," says Muzbah Cunduz, the ferryboat captain. "But the land around here does not."